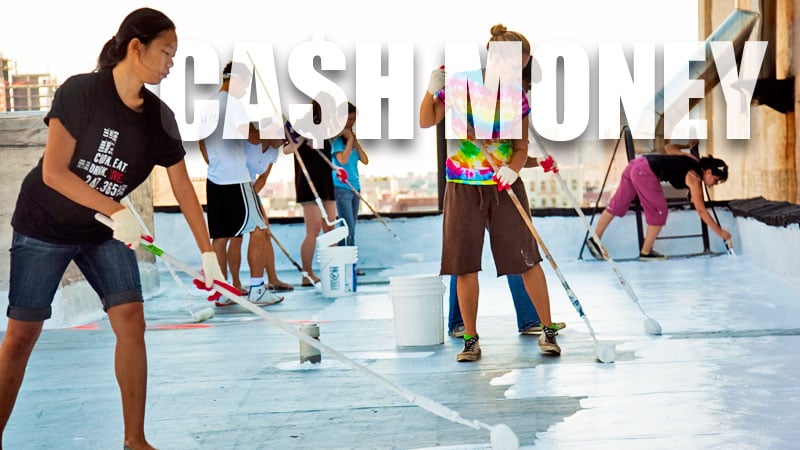 In a first-of-its kind study published in the Energy and Buildings Journal earlier this year, a group of researchers compared the energy costs of buildings with white roofs against both trendy “green” roofs and conventional “black” roofs. The most shocking part of the study? White roofs saved- on average!- $2.40 per square foot over conventional roofs, and even out-performed green roofs, handily. “Owners concerned with global warming should choose white roofs,” says the study, “which are three times more effective than green roofs at cooling the globe.”

Granted, that $2.40/sq. ft. savings over conventional roofs is calculated over a 50 year period, but if the guys at Switzer Performance (my old 9-5 in Oberlin, OH) made the switch to a white roof at their 80,000+ sq. ft. facility, they’d save nearly $4000 per year- and that 80K foot facility is small potatoes in the commercial real estate and manufacturing world, where 224,000 sq. ft roofs are fairly standard practice.

Painting roofs a more reflective color in a bid to reduce costs is hardly a new idea, of course. We’ve covered the topic for more than five years- and even politicians like former President Bill Clinton have taken up the “white roof” mantra, writing that “Every black roof in New York should be white; every roof in Chicago should be white; every roof in Little Rock should be white. Every flat tar-surface roof anywhere! In most of these places you could recover the cost of the paint and the labor in a week.”

At $2.40/ft. over 50 years, a white roof would definitely not pay for itself in a week. Still, when it’s time to redo the roof on your residential or commercial property, choosing white is definitely the planet-friendliest way to go.