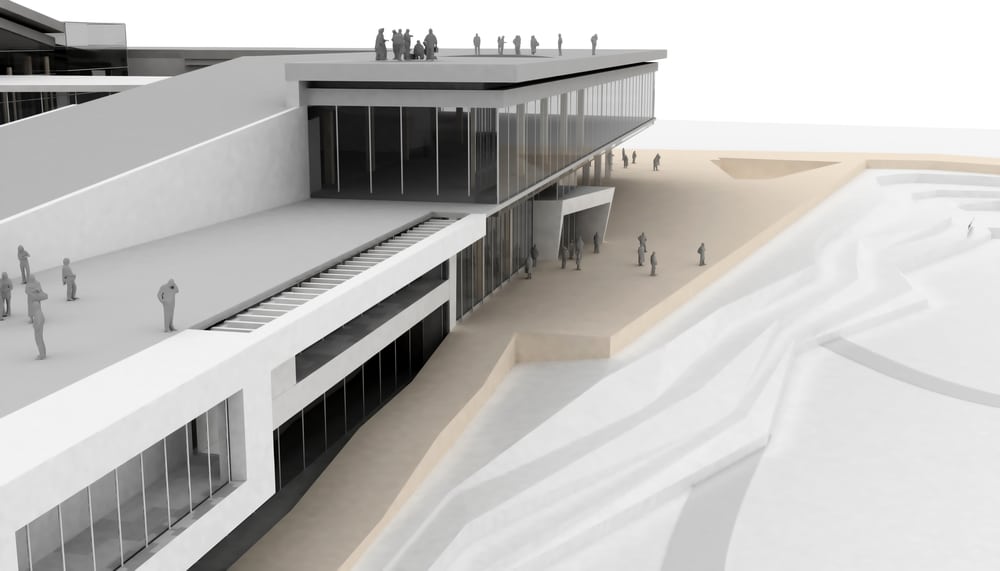 Thanks to GreenWire for this story about a California lab that allows designers to test the energy efficiency of the interior of a building before the building is constructed:

Federal scientists have designed a rotating, customizable lab that allows commercial real estate developers to create mock-ups of planned buildings to test out their energy use.

The Energy Department-funded Flexlab, unveiled earlier this week at the Lawrence Berkeley National Laboratory, is aimed at bridging the gulf between expected savings from buildings’ efficiency and actual results.

Buildings — which take up 40 percent of the country’s energy use — often don’t deliver on their promises of efficiency, according to a 2008 study that found a quarter of efficiently designed buildings underestimated their energy intensity by at least 25 percent.

The lab is “trying to understand the gap between how things work in the world and how they should work,” said Stephen Selkowitz, LBNL’s principal investigator for the project and a senior adviser for building science in the lab’s Environmental Energy Technologies Division.

DOE Deputy Secretary Daniel Poneman stressed the lab’s role in combating climate change and meeting the emissions objectives that President Obama set out last year in his Climate Action Plan. “If we don’t really bend the curve on efficiency, we’re just not going to make the targets,” he said. “You’re going to have to pull together every muscle and sinew, and that’s what this facility does.”

Funded with $15.7 million from the 2009 American Recovery and Reinvestment Act, the facility allows building planners to create mock-ups of their interiors to see how they perform in the real world with an eye toward collecting data on energy efficiency as well as comfort and ease of use.

The lab consists of four buildings, each containing two rooms that can be outfitted to mirror an existing or planned building’s layout. It is literally flexible: One of the buildings can rotate 270 degrees in order to test various levels of sunlight, producing a slightly disorienting effect but a picturesque view of the San Francisco Bay and skyline.

Beyond that, the lab is endlessly customizable. Clients can switch out walls, windows, floors, lighting, heating and air conditioning, and even power sources. The buildings can each be hooked up to multiple forms of energy, including solar panels, fuel cells, combined heat and power units, and battery storage. They can also be operated in conjunction with electric vehicle chargers to see how the various components interact.

Clients can also bring employees to work in the rooms to test their comfort levels, and there are temperature sensors at various heights as well as cameras to detect glare.

The cells are equipped to model the latest in energy efficiency standards as well as older technology. The electrical equipment is generously sized in order to handle 1980s-era setups, which are ripe for retrofits.

Bay Area companies are already lining up to use the facility. The drug developer Genentech and its contractor, Webcor Builders, are using the rotating room to test components for a 250,000-square-foot building in South San Francisco. They hope the advance work will save them money in the long run.

“Energy is 10 times the cost of the actual building,” said Webcor CEO Jes Pedersen. “The capital costs are well worth the investment.”

California utility Pacific Gas and Electric Co. is preparing to use the lab to test lighting and heating systems, which it will then offer to commercial customers through an existing efficiency grant program. The tests are aimed at reaching California’s goal of zero net energy use for its commercial buildings by 2030, as well as meeting or exceeding the latest state efficiency standards for buildings.

The lab could also help bridge the gap between emerging technologies and public acceptance. Big commercial builders and customers often hesitate to install the latest versions of equipment because they are as-yet unproven, industry executives said.

Use of the lab costs $3,000 per cell per week, plus whatever expenses are required to design the experiment and reconfigure the space from the previous user. There is still space available in next year’s testing schedule, Flexlab Executive Manager Cindy Regnier said.