How Green Is Renewable Energy?

Thanks to ClimateWire for their interesting article on research into the environmental impact of manufacturing the equipment used to create renewable energy, something we don’t often discuss.  An excerpt is below: 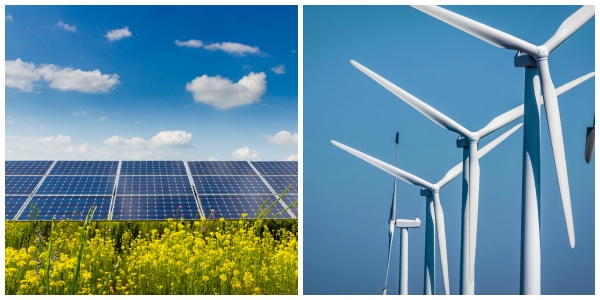 When it comes to energy, you have to invest some in order to get some.

Whether drilling for oil or baking silicon for photovoltaic panels, there is an energy price for the energy we produce, researchers say. However, these considerations are often in a policy blind spot, and most energy regulations focus on economic costs more than energy outlays.

But in order to make headway against climate change and cut into carbon emissions, decision makers will have to rely increasingly on net energy analyses that include the heat and electricity expended from mining the raw materials all the way up to recycling aged solar panels or scrapping worn turbines. These measures better account for the environmental fallout from energy.

In an article published in Nature Climate Change, researchers at Stanford University argued for assessing the overall energy balance of different energy technologies. Such measures are more informative than price tags alone and could point scientists toward strategies that have a greater benefit for the environment.

“We were finding that a simple economic analysis of these startup technologies were not accurate,” explained Charles Barnhart, a co-author and a postdoctoral researcher at the Global Climate and Energy Project at Stanford.

The retail price of coal, oil, solar panels or wind turbines only tells part of the story. Subsidies and taxes can artificially tip prices one way or another. In addition, though one type of fuel or generator may appear cheap, it could require more energy to make than it will produce over its lifetime, leaving an energy deficit.

Any way you slice it, fossil fuels burn more energy

This was the case for the first generation of solar panels, which required high-temperature processing during manufacture but weren’t durable enough to last until they paid back the energy investment.

Similarly, fossil fuels like petroleum are fungible, but differ in energy needed to tap various sources. Oil that seeps through cracks near the surface of the earth requires less energy to harness than wells at the bottom of the ocean or sticky crude buried in oil sands.

To form their net energy analyses, the researchers conducted a meta-analysis of published life-cycle assessments of different energy sources and devices, looking at how much energy producers expend to make photovoltaic panels, grid-scale batteries and steam-driven turbines.

They limited their assessments to the period starting with extracting raw materials up to the point when an energy system reached shelves. This was because many of the newer energy technologies have not been around long enough to wear out and complete their life cycle.

Using such an assessment changes the calculus for strategies like grid-level energy storage. Compared to ramping natural gas-fired peaker power plants to meet energy demand, storing energy from renewables in hydraulic reservoirs or in batteries may make more sense when accounting for carbon emissions instead of just costs.


« Many Doctors Unaware of Effects of Buildings on Health

Bio-Tower Made of Bricks Grown from Corn »