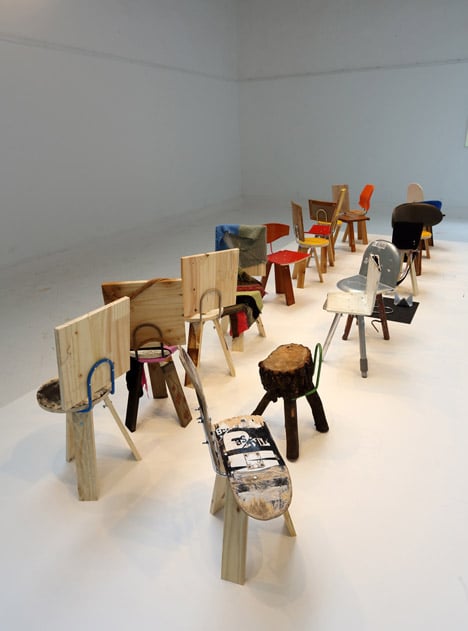 The More Than This exhibition in Barcelona showcases a collection of chairs made from salvaged materials often found on the street.  The chairs are made by people from various backgrounds, including members of the Arrels Fundació organisation, which encourages people who have lived on the streets to embrace their creative side.

“The challenge was not really about trying to make them the way a cabinetmaker or craftsman would, but to try to make them exploring other techniques, like those used in the participants’ daily occupations,” Spanish industrial designer and curator of the exhibit Curro Claret said.

Claret designed a horseshoe-shaped metal attachment that the participants could use to affix a back rest to the handmade chairs, which screws into a triple-pronged metal plate underneath the seat. “The experiment explores how each of these people, with the help of their metal pieces, can make the chairs on their own as much as possible, giving shape and aesthetics in a very direct way, with his or her own identity,” he said.

One of the chairs was designed by Careli, a cleaning woman by trade, who pieced together planks of recycled wood before burning them with an iron to create a darker pattern in the grain of the chair.

The skater chair was designed by a local skateboarder and features a splintered back rest and seat, made from a broken board.

Another chair is covered with fake designer handbags, found at street sellers’ stalls in Barcelona, and another features a charred tree stump sat atop recycled planks, taken by a fireman from a burning forest he fought to save.