Get to know a solar-to-electricity system that isn’t stuck on the rooftop. Thus is s story about tenacity in renewable energy research and a long-range vision that might provide one solution to take on climate change using a network of solar roads, driveways, and sidewalks. Meet Scott and Julie Brusaw, co-founders of Idaho-based Solar Roadways. 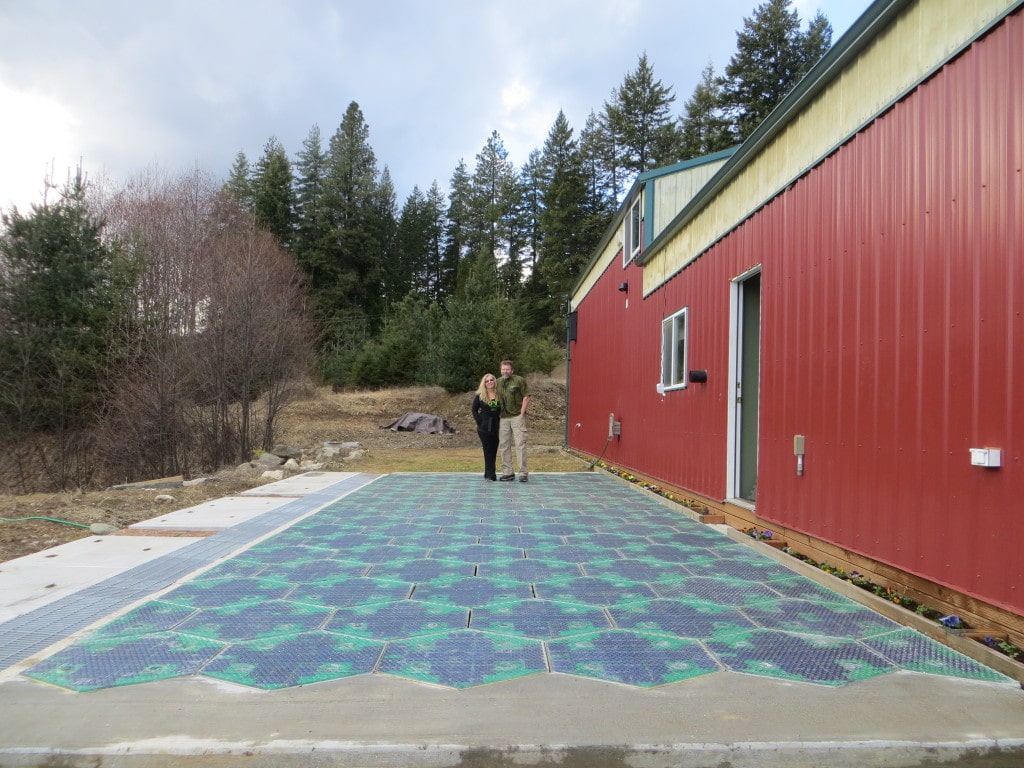 Here is the story as it is told on their website:

“Suppose we made a section of road out of this material and housed solar cells to collect energy, which could pay for the cost of the panel, thereby creating a road that would pay for itself over time. What if we added LEDs to “paint” the road lines from beneath, lighting up the road for safer nighttime driving? What if we added a heating element in the surface (like the defrosting wire in the rear window of our cars) to prevent snow/ice accumulation in northern climates? The ideas and possibilities just continued to roll in and the Solar Roadway project was born.”

Based on initial testing, this modular hexagonal PV paving system can withstand loads up to 250,000 pounds). The panels can be installed on roads, parking lots, driveways, sidewalks, bike paths, playgrounds, and pay for themselves through the generating electricity – ultimately enough to power connected homes or businesses.

“We have what we call virtual storage,” says Brusaw in an interview with Green Building Elements. He states the utility company came out and installed one of those meters that spin backwards, allowing excess energy to be fed back to the grid.”Whatever our building doesn’t use during the day goes back on the grid.”

He adds multiple storage methods can be adapted to the system. “We can put banks of batteries or flywheels – whatever method is out there – we just don’t do that right here, right now.”

The panels can also be built with other features, including: a heating element similar to a car’s rear window defroster, keeping roadways snow/ice free at a 35-degree Fahrenheit temperature. Also, LEDs can be used to make road lines and signage, and an attached Cable Corridor can be used for power and data cables. EVs will be able to charge with energy from the sun (instead of fossil fuels) from parking lots and driveways and after a roadway system is in place, mutual induction technology will allow for charging while driving.

Over the past four years Solar Roadways has generated a considerable amount of interest. Importantly, it received two phases of funding from the U.S. Federal Highway Administration for research and development of a paving system that will pay for itself over its lifespan. The Brusaws are about to wrap up our Phase II contract (to build a prototype parking lot) and now need to raise funding for production.

This modular system that will modernize our aging infrastructure with an intelligent system that can become the new Smart Grid. To wit, the Brusaws won the Community Award of $50,000 by getting the most votes in GE’s Ecomagination Challenge for “Powering the Grid” in 2010. We had the most votes again in their 2011 Ecomagination Challenge for “Powering the Home”.

The tough glass surface has been tested for traction, load testing, and impact resistance testing in civil engineering laboratories around the country, and exceeded all requirements.

The Brusaws believe their panelized roads could produce more than three times the electricity consumed in the United States.

The design is brilliant, simple, and promising. And not just for roadways. Think about the rooftop or the siding envelope. Cost has not yet been determined, says Brusaw, pointing out Solar Roadways is still in Phase II of its contract with the Federal Highway Administration. The final report is due in July.

“At that time we’ll have all of the costs that went into the prototype. Individual prototypes are real expensive. What we’ll do then is go back to the manufacturer and I’ll tell him, now I know what you charged me for one piece; what will you charge for 100,000, or 500,000 pieces?”

It is a long distance from R&D to reality, but the invention is brilliant, simple, and rich with possible applications. There have been abundant naysayers, as well. But a recent Indiegogo campaign targeting $1 million in development funding, has already raised over $2 million. “It’s been a very pleasant surprise,” Brusaw says, adding he is already collecting resumes and interviewing people. Positions this electrical engineers most needs: structural engineer, a civil engineer, a mechanical engineer, and a materials engineer.

Here’s to a bright and high-energy future for all.