DeZeen featured this story about a fabric wall that responds to hand gestures, similar to those used on a mobile phone or tablet, and shows the potential for technology to control the shape of our physical environment. 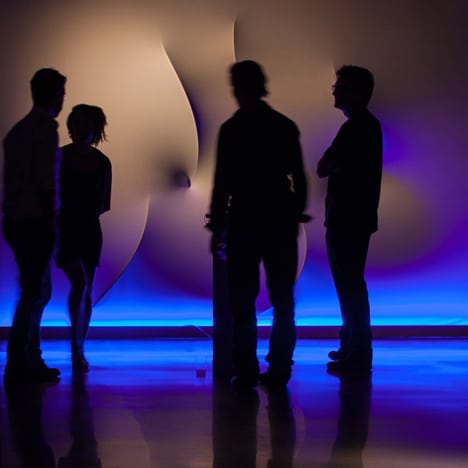 “Mobile devices already use techniques based on touch and gesture-based languages – swiping, clicking, dragging and so on – as a natural, intuitive mechanism of control,” said Farahi. “But can these techniques be used to control entire environments?”

Farahi produced the installation for the iMAPpening exhibition of students work at the USC School of Cinematic Arts in Los Angeles – where she is an Annenberg Fellow and PhD student – developing the original concept created for an exhibition last year.

The installation consists of a screen made from elasticated Spandex fabric stretched over a wooden frame that conceals several curved aluminium rods.

The hinged movement of the rods is controlled by eight DC motors connected to an Arduino microprocessor that receives information about the actions of the user from a motion-sensing computer-game controller.

Gestures like swiping, tapping and drawing a circle in the air with a hand are picked up by the Leap Motion Controller, prompting the mechanism behind the surface to shift and produce a pattern of curving contours that mimics each movement.

“In the future it may even be possible to design a direct interface which allows users to interact with their environments without any intermediary mechanism,” the designer added. “Such interfaces will make control of our physical environment much easier.”

Click to see a video of Breathing Wall 2.0 in action on Vimeo.