Going through architectural and design school, you are told repeatedly to pick a concept and follow it through. This concept can be a specific design element such as a circle, a play in textures or a fictitious illusion such as dreaming.

The architectural team for the redevelopment of the Young Harris College (YHC) found a concept and literally the people that reside there get to follow that concept from a freshman in college through graduation.

The new resident halls that have been added to YHC in Georgia as they are changed from a two-year school to a four-year university are designed by Lord Aeck Sargent (LAS). The three buildings are for freshmen The Towers, for sophomores The Enotah Hall and for upper classmen The Village. 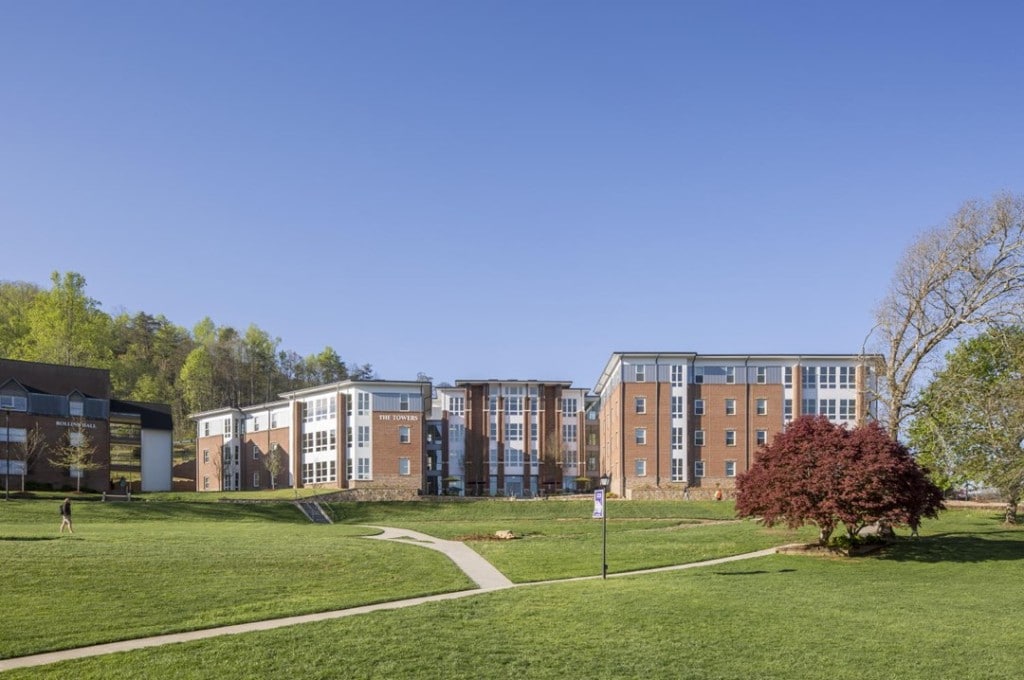 The concept that LAS has presented the school is a strict strategy about living quarters for the students. It is called “progressive housing.”

The Towers are a 226-bed resident hall which opened in 2013, where the living spaces are small but the community spaces are large emphasizing the need for students to interact with other students and become part of the social atmosphere of college life. The common spaces are called Pods and they are designed specifically, using strong colors and materials to represent each individual communal grouping.

“The Towers is for freshmen only. As such, it limits the space in the living units and maximizes common spaces in order to encourage socialization and community building among students just entering college. The social spaces bring students out of their rooms in a very intentional way.”

Enotah Hall, the sophomore building, is the next step in the ‘progressing housing’ process. Its living spaces and common spaces are combined instead of separated. This is because people are more comfortable at this stage inviting people in and are not having to be forced into interaction.

The Village is the upper classmen housing that is more like traditional apartment living. This is to allow the students to prepare for the transition they will make into living, once they graduate, in the ‘real world.’

The progression of living quarters is a new college concept but it is not the only part of these new designed structures that is forward thinking in its development. They have been designed with updated materials such as subway tiles in the restrooms, “trendy and unique” color combinations in the Pods, plus many sustainable features.

These features all lead to the anticipation of becoming LEED certified. They include:

Here ‘progressive student housing’ meets the concept literally by following a personal growth of students through their years in college and also through designing housing that meets new standards of progressive sustainable architectural designs.

All photos by Jonathan Hillyer