A solar panel output may be green, but the manufacturing footprint it has left behind may be anything but green or sustainable. Take the csse of this recent study pitting European solar panel manufacturing and that of China’s.

According to a Northwestern University study, China’s manufacturing footprint is far less green than that of Europe. Solar panels made in China have a higher overall carbon footprint and are likely to use substantially more energy during manufacturing than those made in Europe. The study was conducted by Northwestern University and the U.S. Department of Energy’s Argonne National Laboratory. The report compared energy and greenhouse gas emissions that go into the manufacturing process of solar panels in Europe and China. 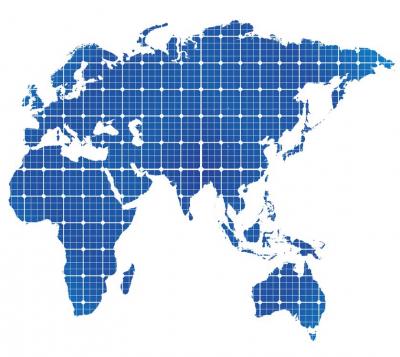 A new study by Argonne and Northwestern scientists reported that solar panels manufactured in China are likely to use more energy to make and have a larger carbon footprint than those made in Europe. Credit: Image by Renee Carlson/Argonne National Laboratory

“We estimated that a solar panel’s carbon footprint is about twice as high when made in China and used in Europe, compared to those locally made and used in Europe,” said Fengqi You, assistant professor of chemical and biological engineering at Northwestern and corresponding author on the paper.

“While it might be an economically attractive option to move solar panel manufacturing from Europe to China, it is actually less sustainable from the life cycle energy and environmental perspective—especially under the motivation of using solar panels for a more sustainable future,” he said.

The team performed a type of systematic evaluation called life cycle analysis to come up with these hard data. Life cycle analysis tallies up all the energy used to make a product—energy to mine raw materials, fuel to transport the materials and products, electricity to power the processing factory, and so forth. This provides a more accurate picture of the overall energy consumed and produced and the environmental impact of making and using a solar panel.

Assuming that a solar panel is made of silicon—by far the most common solar panel material—and is installed in sunny southern Europe, a solar panel made in China would take about 20 to 30 percent longer to produce enough energy to cancel out the energy used to make it. The carbon footprint is about twice as high.

The biggest reason is that China has fewer environmental and efficiency standards for its factories and plants and generates more electricity from coal and other non-renewable sources, the authors said.

“It takes a lot of energy to extract and process solar-grade silicon, and in China, that energy tends to come from dirtier and less efficient energy sources than it does in Europe,” said Argonne scientist and co-author Seth Darling. “This gap will likely close over time as China strengthens environmental regulations.”

The chart shows the number of years that a solar panel must operate in order to generate enough electricity to “pay back” the energy used to make the panel. Because there are fewer energy regulations in China, panels made there use more energy, according to the study. The colors in the bars represent contributions from the different stages of making a solar panel (e.g., ‘Si feedstock’ represents the carbon emitted during mining and processing of raw silicon to make the panel). Credit: Figure by Fengqi You et. al

According to the news release, the team also compared the numbers for different types of silicon solar panels. Single-crystal solar panels are better at harvesting energy than other types, but take the longest to “pay back” the energy used to manufacture them because the process is more energy-intensive. Multicrystalline panels came next, followed by ribbon silicon panels, which are easiest to manufacture but least efficient—however, their payback time was fastest.

To encourage more sustainable production of solar cells, the authors suggest a break-even carbon tariff. “This would be based on the carbon footprint and energy efficiency difference between manufacturing regions, and would be a better market- and science-based solution than a solar panel tariff,” said Dajun Yue, a Northwestern graduate student in You’s research group and lead author on the paper.

“The break-even carbon tariff we calculated, which is at the range of €105-129 per ton of carbon dioxide, depending on the possible carbon tax to be imposed by these two regions in the near term, is close to the reported CO2 capture and sequestration cost,” You said.

Rutgers Patents: Toward a Greener Concrete »