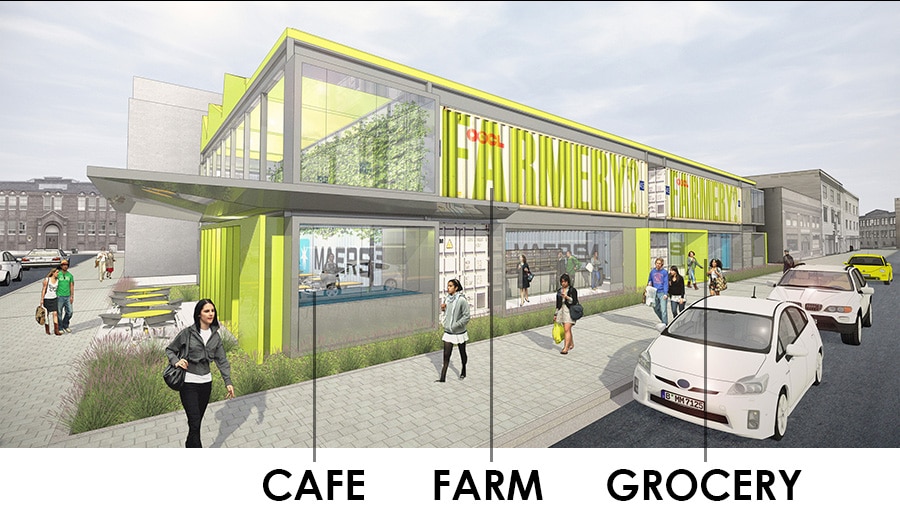 The Farmery, a combined grocery store and urban farm where grocery shoppers not only get a glimpse of how their food is grown, but also get to harvest some of their own ingredients, is the dream of Ben Greene and a team of eight others.

With many urban areas suffering from a lack of options when it comes to fresh produce, The Farmery seems to offer a glimmer of hope.  Mini-Farmeries are already up and running in places like Durham, NC,  where fans of fresh fruits and veggies can pick up their local tomatoes, cucumbers, strawberries, potatoes, squash, and blackberries inside a 200-square-foot shipping container.

In the larger version, Greene imagines an open bottom floor that would hold the main grocery and a café for selling drinks and deli meats. Above that, eight shipping containers supported by beams and equipped with side panels for growing herbs and greens, nourished by what Greene calls the “Living River Growing System” — a raceway tank that looks and acts like a stream, filtering and channeling nutrient-filled water to the seven-foot-high growing panels. On top of all this would sit a greenhouse roof.

The shipping container model has had its share of challenges.  Winter weather and temperature changes have been hard to control, so not much growing has been going on.  It has been successful as a temporary farm stand, though, allowing local farmers to sell their produce in areas of the city they wouldn’t normally reach.

The compact size of the structure could offer a new way to bring fresher produce to neighborhoods classified as food deserts, where low-income folks live and where big-box grocery stores are least likely to be found.

The full-scale store is expected to cost between $2-3 million due to the special systems and equipment needed for growing the produce.  Greene hopes to have a developer begin construction on the first official Farmery somewhere in the U.S. this fall for a spring 2015 opening.

Photos and drawing courtesy of: Farmery