The Economic/Green Philosophy of a Trash Barn

I published this post some time ago but recently discovered the video link was incorrect (MY MISTAKE). It is a story about a great project. 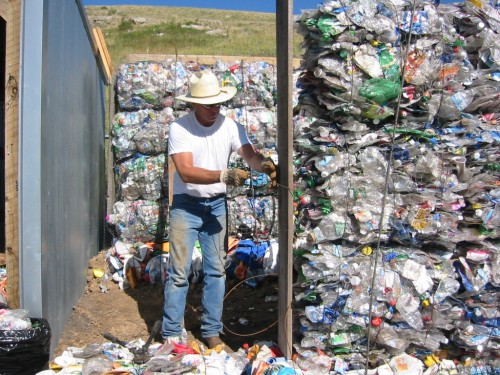 When Doug Eichelberger built a barn on his Larkspur, CO ranch out of plastic and paper that wasn’t even fit for the recycling trucks, he was a pioneer in experimentation with alternative building materials. And as important, materials that prove to be cost-effective for use.

The architect and sculptor had a fundamental understanding of how he might construct a building using materials that had no other destination than the landfill. He rented a baler and a forklift and began erecting walls that were going to last.

In this VIDEO, Eichelberger takes viewers on a tour of a very functional barn that was constructed with materials that were considered no better than trash.

It is now well over a decade since this barn was built and it appears to have judiciously withstood the tests of time, hot and cold, very intense Colorado sun, and wind.

While these reclaimed materials may not seem ideal to some homebuilders, they make a viable building solution that should be seriously considered, says Eichelberger, adding that poor regions in parts of Africa and other continents have an abundance of plastic waste that never even makes it to a landfill and instead floats out into the oceans.

The idea of repurposing materials that usually get tossed away provides numerous benefits that more in the building trades are starting to consider.