A new report from the Geothermal Energy Association (GEA), released today at the organization’s International Geothermal Showcase in Washington, D.C., reveals the international power market is booming, with a sustained growth rate of 4% to 5%. The “2014 Annual U.S. & Global Geothermal Power Production Report” finds almost 700 projects currently under development in 76 countries. Threats caused by climate change and the need for a renewable energy source that can satisfy both firm and flexible grid needs are among the key factors driving the international community to invest in geothermal power. 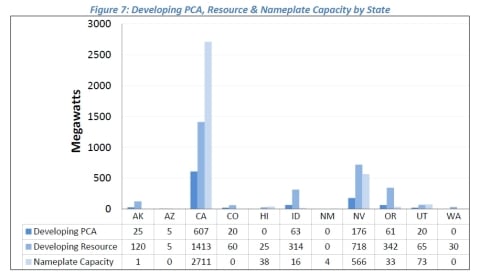 International geothermal market growth was up, while stateside growth held steady; 85 MW of the total global 530 MW of new geothermal capacity in 2013 was in the U.S., according to the new GEA report. U.S. growth was flat because of policy barriers, gridlock at the federal level, low natural gas prices and inadequate transmission infrastructure.

“While there was a modest downturn in capacity additions, the Industry Update also underscores the tremendous untapped potential for geothermal energy,” said GEA Executive Director Karl Gawell. According to the report, the geothermal industry was working on 977MW of new capacity (Planned Capacity Additions or PCA’s) at sites that hold over 3,092MW of power potential in eight western states, the GEA report indicates (see Figure 7).

U.S. additions in Utah, Nevada, California, and New Mexico kept the industry on the map domestically in 2013, and future growth looks promising. “The geothermal resource base is still largely untapped,” noted Ben Matek, GEA’s Industry Analyst. “With new initiatives in Nevada, California and Oregon moving to recognize the values of geothermal power, we are optimistic that state policies could spark another period of growth in geothermal power over the next decade,” he added.

In 2013, 25 pieces of legislation in 13 U.S. states were enacted specifically to address geothermal power and heating systems, creating a foundation for the environment needed to foster geothermal growth in these states. Past evidence shows successful policy initiatives have translated into growth; in Nevada, for example, which leads the way as one of the most business-friendly environments, the number of developing projects (45) more than doubles that of California (25).

The Salton Sea Resource Area is a new initiative of California that could be a significant source of growth for the U.S. geothermal power industry if several policy barriers are overcome in the near term. The Imperial Irrigation District has pledged to build up to 1,700 MW of geothermal power by the early 2030’s at the Salton Sea. If successful, this initiative could increase the nameplate capacity of the U.S. by 50% over the next 20 years.

Elsewhere in the U.S., the Public Utility Commissions in Nevada and Oregon recently created potentially beneficial opportunities for geothermal power, while the Washington State Assembly clarified confusing legislation. New Mexico debuted its first geothermal power plant in 2013, with work by Cyrq Energy, and the state showed legislative support for future projects when it passed H.B 85. The legislation matches federal royalty rates and requires geothermal resources be managed as renewable resources. In Alaska, the City of Akutan is