Read below for a financial snapshot of the 2013 renewable energy sector. 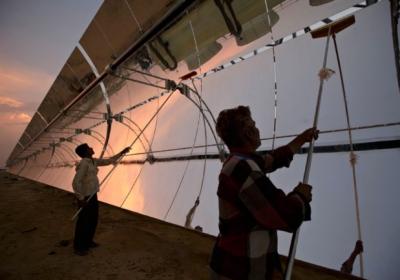 Renewable energy’s share of world electricity generation continued its steady climb last year despite a 14 per cent drop in investments to US$214.4 billion, according to a new report released today.

According to Global Trends in Renewable Energy Investment 2014 – produced by the Frankfurt School-UNEP Collaborating Centre for Climate & Sustainable Energy Finance, the United Nations Environment Programme (UNEP) and Bloomberg New Energy Finance — the investment drop of $US35.1 billion was partly down to the falling cost of solar photovoltaic systems. The other main cause was policy uncertainty in many countries, an issue that also depressed investment in fossil fuel generation in 2013.

Globally, renewables excluding large hydro accounted for 43.6 per cent of newly installed generating capacity in 2013. Were it not for renewables, world energy-related CO2 emissions would have been an estimated 1.2 gigatonnes higher in 2013. This would have increased by about 12 per cent the gap between where emissions are heading and where they need to be in 2020 if the world is to have a realistic prospect of staying under a two degree Centigrade temperature rise.

“A long-term shift in investment over the next few decades towards a cleaner energy portfolio is needed to avoid dangerous climate change, with the energy sector accounting for around two thirds of total greenhouse gas emissions,” said Achim Steiner, UN Under-Secretary-General and Executive Director of UNEP. “The fact that renewable energy is gaining a bigger share of overall generation globally is encouraging. To support this further, we must re-evaluate investment priorities, shift incentives, build capacity and improve governance structures.”

“While some may point to the fact that overall investment in renewables fell in 2013, the drop masks the many positive signals of a dynamic market that is fast evolving and maturing,” he added. “This should give governments the confidence to forge a new robust climate agreement to cut emissions at the 2015 climate change conference in Paris.”

In recent years, Global Trends in Renewable Energy Investment has become the standard reference for global renewable energy investment figures. The 2014 edition will be showcased at the Bloomberg New Finance Initiative “Future of Energy Summit” in New York from 7-9 April 2014.

Ulf Moslener, Head of Research of the Frankfurt School-UNEP Collaborating Centre for Climate & Sustainable Energy Finance, agreed that the overall decline in investment dollars had been disappointing. However, he said, “foundations for future growth in the renewable energy market fell into place in 2013.”

Michael Liebreich, Chairman of the Advisory Board for Bloomberg New Energy Finance, said: “Lower costs, a return to profitability on the part of some leading manufacturers, the phenomenon of unsubsidized market uptake in a number of countries, and a warmer attitude to renewables among public market investors, were hopeful signs after several years of painful shake-out in the renewable energy sector.”

The report points to the end of a four-and-a-half year 78 per cent decline in clean energy stocks, which bottomed out in July 2012 and then gained 54 per cent in 2013 – an improvement that took place as many companies in the solar and wind manufacturing chains moved back towards profitability after a painful period of over-capacity and corporate distress.

Large hydro-electric projects were another important area of investment with at least 20 GW of capacity estimated to have come on stream in 2013, equivalent to approximately US$35 billion of investment.

The year marked a deepening involvement of long-term investors such as pension funds, insurance companies, wealth managers and private individuals in the equity and debt of wind and solar projects. Part of their new engagement was through clean energy bond issuance, which set a new record of US$3.2 billion raised in 2013, as well as via new types of financing vehicles including North American ‘yield companies’ and real estate investment trusts.

But the star performer among investment types in 2013 was public market equity-raising by renewable energy companies, which jumped 201 per cent to US$11 billion. This was the highest since 2010, spurred on by the rally in clean energy share prices and institutional investors’ appetite for funds offering solid yields.