The San Diego Regional Airport Authority, which oversees the  San Diego International Airport (SDIA), has announced plans to install a 3.3-megawatt solar system that is expected to save up to $8 million in energy costs over 20 years. The photovoltaic system will be the first to be built at new LEED-certified Terminal 2 West expansion and represents a growing commitment to using renewable energy. 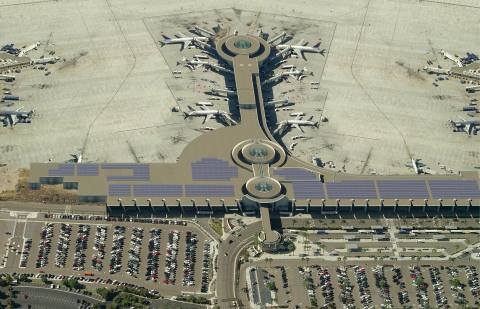 The authority will work in partnership with Borrego Solar Systems, Inc. to install solar panel arrays on the roof of the newly expanded Terminal 2 West at SDIA and in a section of the Terminal 2 short-term parking lot adjacent to the terminal.

Borrego Solar plans to break ground on the project in mid-2014 and has set an estimated completion date for late 2014.

Authorities expect the system to generate an estimated 5.3 million kilowatt-hours (kWh) of electricity in its first year of operation – enough power to offset a projected 10%-13% of the energy needs for Terminals 1 and 2 at SDIA.

Borrego Solar will build and finance the system through a 20-year power purchase agreement (PPA), which will save the Airport Authority a projected $3 million to $8 million over the contract period. Using a PPA, the Airport Authority is able to ‘go solar’ at no upfront cost and will purchase clean solar energy at a cost less than it would otherwise pay to the local utility.

“This solar project – the first at the airport – will be a noteworthy and visible highlight of our ongoing commitment to sustainability,” said Thella F. Bowens, president and CEO of the San Diego County Regional Airport Authority, in the press announcement. “By partnering with Borrego Solar, we will boost our sustainability efforts with clean energy generation, providing environmental benefits to the region and financial savings to the Airport Authority. And we’re happy to be working with a company that is a local San Diego success story, employing local workers in construction of this project.”

SDIA was the first major airport in the nation in 2008 to adopt a formal sustainability policy that included a commitment to reducing greenhouse gas emissions and achieving LEED certification in all new construction.

In February, SDIA was the first U.S. airport to sign the Climate Declaration, a call to action organized by the nonprofit Ceres that urges federal and state policymakers to seize the economic opportunity of addressing climate change. In 2012, it was the first U.S. airport to publish an annual sustainability report based on Global Reporting Initiative guidelines, a reporting framework for sustainability-related performance.