For those involved with solar energy development, Perovskite appears to be a remarkable new material that features two-way applications. Oxford researchers have discovered the material not only absorbs light, it emits it. Here is the recently released press information. 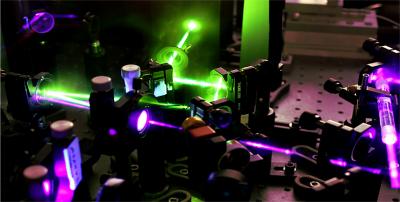 This is an image of the laboratory in which the research was conducted.
Credit: Winton Programme for the Physics of Sustainabilit

Commercial silicon-based solar cells – such as those seen on the roofs of houses across the country – operate at about 20% efficiency for converting the Sun’s rays into electrical energy. It’s taken over 20 years to achieve that rate of efficiency.

A relatively new type of solar cell based on a perovskite material – named for scientist Lev Perovski, who first discovered materials with this structure in the Ural Mountains in the 19th century – was recently pioneered by an Oxford research team led by Professor Henry Snaith.

Perovskite solar cells, the source of huge excitement in the research community, already lie just a fraction behind commercial silicon, having reached a remarkable 17% efficiency after a mere two years of research – transforming prospects for cheap large-area solar energy generation.

By sandwiching a thin layer of the lead halide perovskite between two mirrors, the team produced an optically driven laser which proves these cells “show very efficient luminescence” – with up to 70% of absorbed light re-emitted.

The researchers point to the fundamental relationship, first established by Shockley and Queisser in 1961, between the generation of electrical charges following light absorption and the process of ‘recombination’ of these charges to emit light.

Essentially, if a material is good at converting light to electricity, then it will be good at converting electricity to light. The lasing properties in these materials raise expectations for even higher solar cell efficiencies, say the Oxbridge team, which – given that perovskite cells are about to overtake commercial cells in terms of efficiency after just two years of development – is a thrilling prospect.

“This first demonstration of lasing in these cheap solution-processed semiconductors opens up a range of new applications,” said lead author Dr Felix Deschler of the Cavendish Laboratory. “Our findings demonstrate potential uses for this material in telecommunications and for light emitting devices.”

The researchers found that upon light absorption in the perovskite two charges (electron and hole) are formed very quickly – within 1 picosecond – but then take anywhere up to a few microseconds to recombine. This is long enough for chemical defects to have ceased the light emission in most other semiconductors, such as silicon or gallium arsenide. “These long carrier lifetimes together with exceptionally high luminescence are unprecedented in such simply prepared inorganic semiconductors,” said Dr Sam Stranks, co-author from the Oxford University team.

“We were surprised to find such high luminescence efficiency in such easily prepared materials. This has great implications for improvements in solar cell efficiency,” said Michael Price, co-author from the group in Cambridge.

Added Snaith: “This luminescent behaviour is an excellent test for solar cell performance – poorer luminescence (as in amorphous silicon solar cells) reduces both the quantum efficiency (current collected) and also the cell voltage.”

Scientists say that this new paper sets expectations for yet higher solar cell performance from this class of perovskite semiconductors. Solar cells are being scaled up for commercial deployment by the Oxford spin-out, Oxford PV Ltd. The efficient luminescence itself may lead to other exciting applications with much broader commercial prospects – a big challenge that the Oxford and Cambridge teams have identified is to construct an electrically driven laser.