We have received the following press information from New Energy Technologies. concerning an update on the unveiling of their largest SolarWindow prototype now manufactured. According to a New Energy spokesperson, the device is “something we like to call a vertical power generator on any glass surface.” 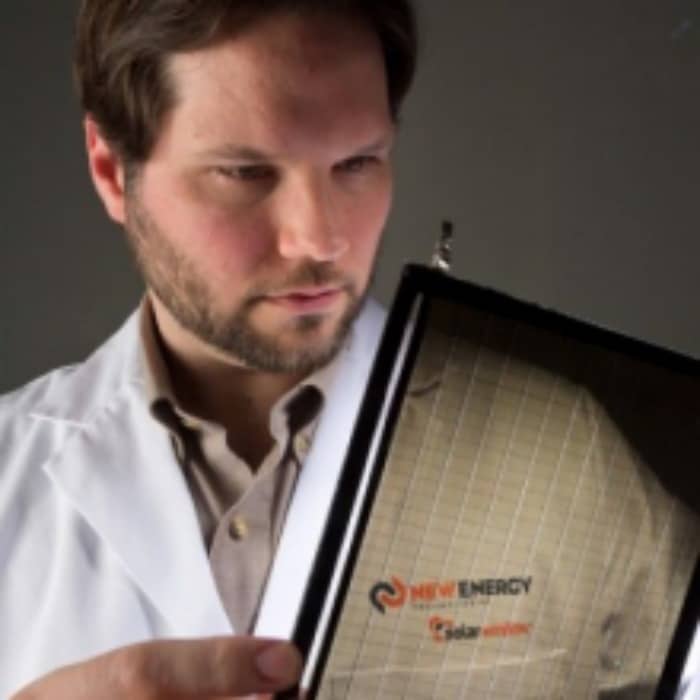 Imagine the ability to look out at the yard, knowing the window you’re using is generating electricity. Renewable energy products like these can have a dramatic impact on commercial and residential energy designs.

The SolarWindow measures 6 inches by 6 inches. The solar module has been produced under the direction of New Energy’s leading scientist, Scott R. Hammond, and his in-house R&D team in collaboration with OPV specialists at the U.S. Department of Energy’s National Renewable Energy Laboratory (NREL) in Golden, Colorado.

Company officials state SolarWindow is currently under development for eventual commercial deployment in the estimated 80 million detached homes in America and more than five million commercial buildings. The federal government estimates the U.S. can save $40 billion annually by reducing energy use in commercial buildings by 20 percent by 2020.

“Among the most important criteria for developing SolarWindow applications for today’s skyscrapers is providing a set of neutral colors that remain see-through and are uniform in fabrication. Today, we’ve revealed a record-breaking, largest-area see-through, organic photovoltaic (OPV) SolarWindow array that addresses tall-tower and commercial building glass requirements, they also bear the promise of facile scale-up capabilities and unparalleled manufacturability,” explained Mr. John A. Conklin, President and CEO of New Energy Technologies, Inc.

Today’s SolarWindow array is over 35% larger than the Company’s previously-fabricated, 170 cm2 working module achievement. That prior module was already 14 times larger than the then-previous largest-area OPV module ever fabricated at the NREL.

NREL is among the world’s most respected and advanced solar-photovoltaic research institutions, and over its 37-year history has been credited for ground-floor support of many of the commercial technologies employed by today’s renewable energy industries. NREL and New Energy have been working through a Cooperative Research and Development Agreement to advance the Company’s SolarWindow™ technology for generating electricity on glass windows.

SolarWindow Transparency, Color, and Uniformity on Track for Commercialization

Architecturally neutral colors and scalable power are important to achieving the Company’s near-term commercial objective, its development of electricity-generating windows for skyscrapers. Engineers envision replacing today’s passive glass windows with New Energy’s electricity-generating SolarWindow systems on all four sides of tall towers – such installations could contribute to the goal of self-powered skyscrapers.

The prospect of applying SolarWindow to all four sides of a building provides a significant advantage over conventional photovoltaic solar-power systems. New Energy’s SolarWindow is capable of operating in both direct, diffuse, and shaded sunlight conditions; conventional systems suffer large efficiency losses, if able to work at all, under such conditions. SolarWindow™ also generates electricity from both natural and artificial light sources such as fluorescent, light emitting diodes (LED), and incandescent lights in offices; conventional systems become less efficient under these conditions, and again, may not work at all.

Unlike traditional building-applied photovoltaic (PV) systems, restricted to use in direct sunlight on very limited skyscraper rooftop space, SolarWindow™ is designed to operate in sunlight and shaded conditions on the many thousands of square feet of glass surfaces common to today’s high-rise towers – a game-changing advantage.

· Able to generate significant electricity from both natural and artificial light;
· Does not require expensive high-temperature or high-vacuum production techniques inherent to conventional solar;
· Constructed using organic materials (polymers), which can be dissolved into liquid form and applied to a variety of surfaces such as flexible plastics and glass; and
· Suited for manufacture using high-speed and high-volume systems such as roll-to-roll or large area sheet-to-sheet processes.
“The unique properties of OPV allow for low-cost, high-volume manufacturing and provide many advantages over conventional, inorganic PV technologies for window applications,” explained Dr. Hammond. “The unparalleled aesthetics of our SolarWindow™ prototypes are the result of numerous novel techniques and processes we’ve developed, which have allowed our joint New Energy-NREL team to successfully overcome technical hurdles and achieve significant milestones with size, electrical power, and color – some of the most important features to developing viable products.”

SolarWindow researchers have rapidly developed the Company’s technology from its early beginnings as a tiny, experimental lab device to a first-of-its-kind, spray-on, see-through, glass window capable of generating electricity. Today, the technology is the subject of forty-two (42) patent filings, and researchers are on track to advance SolarWindow towards full-scale commercial manufacturability – a near term goal.