A multi-institutional team reports that it can increase sugarcane’s geographic range, boost its photosynthetic rate by 30 percent and turn it into an oil-producing crop for biodiesel production. 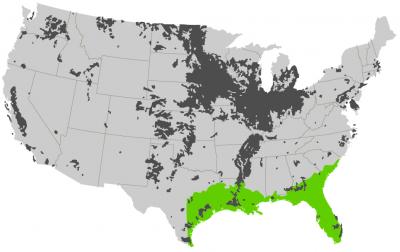 Researchers are engineering sugarcane into a more productive, oil-producing plant that can grow in cooler climes. If their work proceeds as expected, growers will be able to meet 147 percent of the US mandate for renewable fuels with the modified sugarcane, the team reports. This crop could grow on abandoned land in the southeastern United States (about 20 percent of the green zone on the map).
Credit: Stephen Long

These are only the first steps in a bigger initiative that will turn sugarcane and sorghum – two of the most productive crop plants known – into even more productive, oil-generating plants.

The team will present its latest findings Tuesday (Feb. 25) at the U.S. Department of Energy’s ARPA-E Energy Innovation Summit in Washington, D.C.

“Biodiesel is attractive because, for example, with soybean, once you’ve pressed the oil out it’s fairly easy to convert it to diesel,” said Stephen P. Long, a University of Illinois professor of plant biology and leader of the initiative. “You could do it in your kitchen.”

“Sugarcane and sorghum are exceptionally productive plants, and if you could make them accumulate oil in their stems instead of sugar, this would give you much more oil per acre,” he said.

Working first with the laboratory-friendly plant Arabidopsis and later with sugarcane, the team introduced genes that boost natural oil production in the plant. They increased oil production in sugarcane stems to about 1.5 percent.

“That doesn’t sound like a lot, but at 1.5 percent, a sugarcane field in Florida would produce about 50 percent more oil per acre than a soybean field,” Long said. “There’s enough oil to make it worth harvesting.”

The team hopes to increase the oil content of sugarcane stems to about 20 percent, he said.

Using genetic engineering, the researchers increased photosynthetic efficiency in sugarcane and sorghum by 30 percent, Long said. And to boost cold tolerance, researchers are crossing sugarcane with Miscanthus, a related perennial grass that can grow as far north as Canada. The new hybrid is more cold-tolerant than sugarcane, but further crosses are needed to restore the other attributes of sugarcane while preserving its cold-tolerance, Long said.

Ultimately, the team hopes to integrate all of these new attributes into sugarcane, he said.

“Our goal is to make sugarcane produce more oil, be more productive with more photosynthesis and be more cold-tolerant,” he said.


« The Living is the Winner