The natural world provides a remarkable palette for inspiring the imagination. Read this particular story about the development of materials like glass that is less brittle. Such research provides tremendous excitement concerning future material applications.

Normally when you drop a drinking glass on the floor it shatters. But, in future, thanks to a technique developed in McGill’s Department of Mechanical Engineering, when the same thing happens the glass is likely to simply bend and become slightly deformed. That’s because Prof. François Barthelat and his team have successfully taken inspiration from the mechanics of natural structures like seashells in order to significantly increase the toughness of glass. 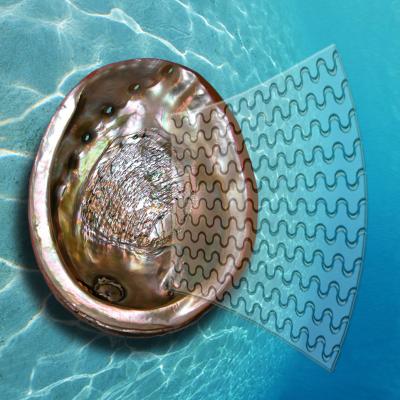 Researchers have turned to nature, and objects like seashells for inspiration, in order to create glass that is 200 times tougher than normal.
Credit: Francois Barthelat

“Mollusk shells are made up of about 95 per cent chalk, which is very brittle in its pure form,” says Barthelat. “But nacre, or mother-of-pearl, which coats the inner shells, is made up of microscopic tablets that are a bit like miniature Lego building blocks, is known to be extremely strong and tough, which is why people have been studying its structure for the past twenty years.”

Previous attempts to recreate the structures of nacre have proved to be challenging, according to Barthelat. “Imagine trying to build a Lego wall with microscopic building blocks. It’s not the easiest thing in the world.” Instead, what he and his team chose to do was to study the internal ‘weak’ boundaries or edges to be found in natural materials like nacre and then use lasers to engrave networks of 3D micro-cracks in glass slides in order to create similar weak boundaries. The results were dramatic.

The researchers were able to increase the toughness of glass slides (the kind of glass rectangles that get put under microscopes) 200 times compared to non-engraved slides. By engraving networks of micro-cracks in configurations of wavy lines in shapes similar to the wavy edges of pieces in a jigsaw puzzle in the surface of borosilicate glass, they were able to stop the cracks from propagating and becoming larger. They then filled these micro-cracks with polyurethane, although according to Barthelat, this second process is not essential since the patterns of micro-cracks in themselves are sufficient to stop the glass from shattering.

The researchers worked with glass slides simply because they were accessible, but Barthelat believes that the process will be very easy to scale up to any size of glass sheet, since people are already engraving logos and patterns on glass panels.

He and his team are excited about the work that lies ahead for them.

“What we know now is that we can toughen glass, or other materials, by using patterns of micro-cracks to guide larger cracks, and in the process absorb the energy from an impact,” says Barthelat. “We chose to work with glass because we wanted to work with the archetypal brittle material. But we plan to go on to work with ceramics and polymers in future. Observing the natural world can clearly lead to improved man-made designs.”