An expanding number of people and businesses show interest in using renewable energy solutions like solar. Cost is proving to be the stumbling block, however. Today, we are posting articles concerning the cost of solar, one concerning two studies from NREL about the soft costs of solar installation, and this press announcement from  Argonne National Laboratory and the University of Pennsylvania about a new material that will contribute to reducing the costs of solar panels. 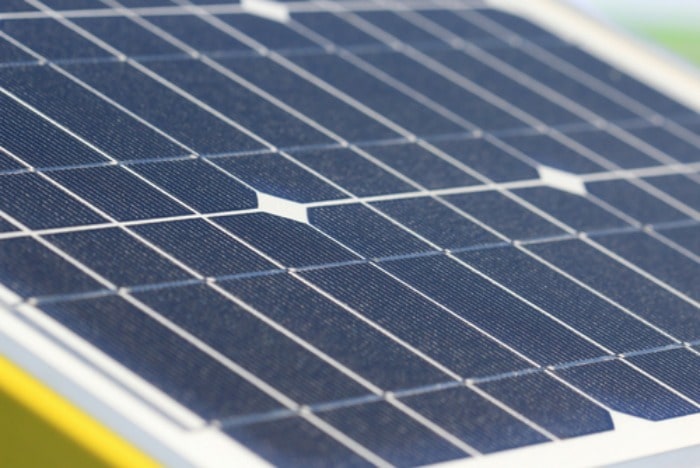 A unique solar panel design made with a new ceramic material points the way to potentially providing sustainable power cheaper, more efficiently, and requiring less manufacturing time. It also reaches a four-decade-old goal of discovering a bulk photovoltaic material that can harness energy from visible and infrared light, not just ultraviolet light.

Scaling up this new design from its tablet-size prototype to a full-size solar panel would be a large step toward making solar power affordable compared with other means of producing electricity. It would also help the nation toward its goal of creating a national power grid that receives one-third of its power through wind and solar sources.

This affordable sun-powered future could be closer than we think thanks to early tests on this new material, which was developed by a team led by scientists at the University of Pennsylvania and Drexel University. The tests were conducted, in part, at the Advanced Photon Source housed at the U.S. Department of Energy’s Argonne National Laboratory.

The team created a new class of ceramic materials that has three main benefits. First, it can produce a solar panel that is thinner than today’s silicon-based market leaders by using one material to do the work of two. Second, it uses cheaper materials than those used in today’s high-end thin-film solar panels. Third, the material is ferroelectric, which means it can switch polarity, a key trait for exceeding the theorized energy-efficiency limits of today’s solar cell material.

Part of the reason solar panels have low efficiency is that the particles collected from the sun enter the solar cell and spread out in all directions. Getting them all to flow one direction typically requires layers of different channeling material. Each time the particles pass between these layers some get lost, decreasing the energy efficiency of the solar cell. The team’s new design uses fewer layers to limit loss and uses ferroelectric material to use up less energy channeling the particles.

It took more than five years to model and design a material with this combination of properties. The material uses perovskite crystals made with a combination of potassium niobate and barium nickel niobate. It has shown significant improvement over today’s classic ferroelectric material. The new material can absorb six times more energy and transfer a photocurrent 50 times denser. Further tuning of the material’s composition should expand efficiency, the scientists say.

“This family of materials is all the more remarkable because it is comprised of inexpensive, non-toxic and earth-abundant elements, unlike compound semiconductor materials currently used in efficient thin-film solar cell technology,” said Jonathan Spanier, a team member from Drexel’s Department of Materials Science and Engineering.

The work is outlined in a paper “Perovskite oxides for visible-light-absorbing ferroelectric and photovoltaic materials” published last month in the journal Nature.

The researchers used X-ray crystallography and powder diffraction at Sector 11 of the APS to ensure the material had the crystal structure and symmetry they intended. This instrument and its unique mail-in program afford convenient and rapid access to the highest-resolution powder diffraction data available in North America, providing a very detailed and accurate picture of this ceramic material’s atomic structure.

Using a suite of experimental tools, the research team demonstrated the material’s ability to move energy in one direction without crossing layers, thus minimizing energy loss. This ability called bulk photovoltaic effect has been known since the 1970s but, until now, was only observable in ultraviolet light, and most of the energy from the sun is in the visible and infrared spectrum.

By adjusting the percentages of component elements in this new material, the research team demonstrated that they can reduce the amount of energy needed to induce conduction, a level called bandgap.

“The parent material’s bandgap is in the UV range,” Spanier said, “but adding just 10 percent of the barium nickel niobate moves the bandgap into the visible range and close to the desired value for efficient solar-energy conversion.”

Carbon capture technology could be vital for climate targets »