With the help of DESY’s X-ray light source PETRA III, researchers of Technische Universität München have, for the first time, watched organic solar cells degrade in real time. This work could open new approaches to increasing the stability of this highly promising type of solar cell. The team headed by Prof. Peter Müller-Buschbaum from the Technische Universität München (Technical University of Munich) present their observations in this week’s issue of the scientific journal Advanced Materials (Nr. 46, 10 December). 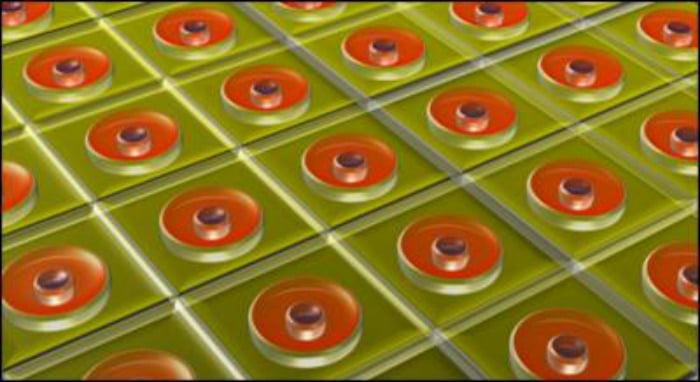 This is a schematic representation of the active layer of the polymer solar cell: The orange dots represent the active domains where light is converted into charge carriers.
Credit: Technische Universität München (Technical University of Munich)

Organic solar cells, especially those based on polymers are inexpensive to produce on a large scale. Thanks to their physical flexibility, they can open up new applications of photovoltaics not possible today. Moreover, they can convert light into electricity at an efficiency of more than ten per cent and could contribute significantly to a large-scale power supply based on renewable sources. However, the efficiency of organic solar cells still rapidly declines and they have a shorter service life than conventional silicon cells.

At the P03 measuring station of DESY’s light source PETRA III, scientists have made the first live observations of the degradation of organic solar cells in operation. To do this, they lit a sample polymer solar cell using a solar simulator, which emits light that matches the spectrum and intensity of sunlight, and recorded the electrical characteristics of the cell over time. At intervals ranging from several minutes to as much as one hour, the researchers also looked inside the solar cell using the sharply focused X-ray beam from PETRA III. In this way they were able to watch how the interior structure of the active layer of the solar cell changed in the course of seven hours, while the efficiency of the cell decreased by around 25 per cent.

Electricity is generated in the active layer at what is known as active domains in these solar cells. Here, light is absorbed and charge carriers are released. The diameter of these active domains increased by 17 per cent during the study, from about 70 to more than 80 nanometres (millionths of a millimeter). At the same time, the mean distance between them increased by 19 per cent from 310 nanometres to around 370 nanometres, as the X-ray measurements showed.

“This suggests that during operation small sites disappear permanently in favour of larger ones,” explains first author Christoph Schaffer, who is a PhD student in Müller-Buschbaum’s group. “Although the domains grow, they also recede from each other, this means that their total active area shrinks. This can precisely explain the observed decline in efficiency.”

“The examination explained the mechanism of degradation for the first time. It’s a first step,” says co-author Dr. Stephan Roth, the DESY scientist responsible for measuring station P03. “The next step involves attempting to reduce or control this growth in a targeted manner, for example, through the addition of appropriate substances. Polymer solar cells could conceivably be produced with an internal structure in which the active sites grow to their optimal size during the first hours of operation,” adds Müller-Buschbaum. “The consequence of such measures could be that industrially produced cells finally cross the economically crucial efficiency threshold also for long-term operation,” emphasises Roth.

Deutsches Elektronen-Synchrotron DESY is the leading German accelerator centre and one of the leading in the world. DESY is a member of the Helmholtz Association and receives its funding from the German Federal Ministry of Education and Research (BMBF) (90 percent) and the German federal states of Hamburg and Brandenburg (10 percent). At its locations in Hamburg andZeuthen near Berlin, DESY develops, builds and operates large particle accelerators, and uses them to investigate the structure of matter. DESY’s combination of photon science and particle physics is unique in Europe.

IHS Report: China’s Power Market Will Overtake That of U.S. and Europe Combined by 2035 »