Science news of discoveries that might further propel the development of cost-effective solar fuel cells is always worth hearing about. Read the following press information from Duke University. 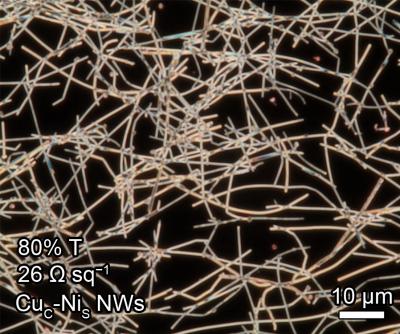 Copper adorns the Statue of Liberty, makes sturdy, affordable wiring, and helps our bodies absorb iron. Now, researchers at Duke University would like to use copper to transform sunlight and water into a chemical fuel.

Converting solar energy into storable fuel remains one of the greatest challenges of modern chemistry. One of the ways chemists have tried to capture the power of the sun is through water splitting, in which the atoms of H2O are broken apart so the hydrogen may be collected and used as fuel. Plants do this naturally through photosynthesis, and for half a century, scientists have tried to recreate that process by tinkering with chemical catalysts jumpstarted by sunlight.

Indium tin oxide (ITO) is one material they’ve commonly tried to use. Researchers prefer it for its transparency — which allows sunlight to pass through and trigger the water-splitting reactions — and its ability to conduct electricity. But ITO is far from an ideal material.

“Indium is not very abundant,” said Ben Wiley, assistant professor of chemistry at Duke University. “It is similar in abundance to silver in the earth’s crust.” As a result, solar fuel cells using ITO will likely remain expensive and uncompetitive with conventional energy sources like coal and natural gas, he said. 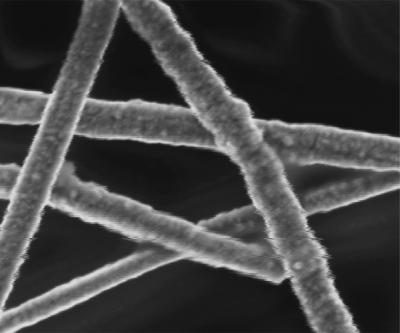 The copper nanowires, seen here with a nickel coating, can split water molecules under the power of sunlight.
Credit: Zuofeng Chen

Wiley’s lab has created something they hope can replace ITO: copper nanowires fused in a see-through film. The team — including two postdoctoral researchers, a graduate student, and a former graduate student from Duke — published their new approach last month in the chemistry journal Angewandte Chemie.

Copper is 1000 times more plentiful and 100 times less expensive than indium. Copper nanowire catalysts also cost less to produce than their ITO counterparts because they can be “printed” on pieces of glass or plastic in a liquid ink form, using a machine that functions much like a printing press. ITO production, by contrast, requires large, sequential chambers of pumps and vacuums that deposit a thin layer of indium atoms at a far slower rate.

The copper nanowire films consist of networks of microscopic metal rods, the properties and applications of which Wiley’s lab has studied for years. The nanowires provide a high surface area for catalyzing chemistry, and Wiley’s team experimented with coating them in either cobalt or nickel — metals that serve as the actual chemical catalyst. Even with a coat of cobalt or nickel, the nanowire films allow nearly seven times more sunlight to pass through than ITO. The films are also flexible, leading Wiley to imagine the completed fuel cells one day being attached to backpacks or cars. 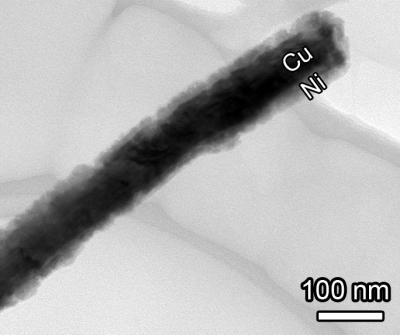 This is a close-up of a single copper nanowire and its nickel shell.
Credit: Zuofeng Chen

In the meantime, engineering and chemistry challenges remain. The nanowire films carry out only one half of the water-splitting equation, a process called water oxidation. The other half of the reaction involves using the electrons obtained from water oxidation to reduce water to hydrogen. Wiley’s team expects to publish their work on this process in the coming year.

“A lot of groups are working on putting together complete devices to generate fuels from sunlight,” he said, but “the efficiencies and costs of these systems have to be improved for them to get to commercial [production].”

Wiley noted that solar energy production is just one application of the copper nanowire films they study. The nanowires also show promise for use in flexible touch screens, organic LED (or OLED) lights and smart glass.