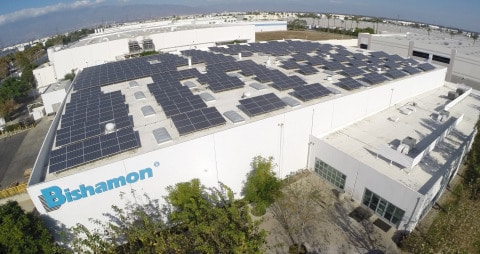 Mitsubishi Electric, a provider of high quality solar power technology, announced today the installation of a 219 kW photovoltaic (PV) system at Bishamon Industries Corporation’s factory in Ontario, Calif. In addition to reducing its impact on the environment, Bishamon expects to realize a 75 percent reduction in electricity costs by converting its factory to solar energy.

The PV system is estimated to supply in excess of 337,930 kWh annually. The clean energy produced over the system’s expected lifespan of 25 years will prevent an estimated 13.1 million pounds of CO2 from entering the atmosphere, which is equivalent to the emissions resulting from burning 13,800 barrels of oil. The project was financed in part by the federal business energy investment tax credit and the California Solar Initiative rebate.

“We decided to go solar as part of our company’s 25-year anniversary celebration. Our solar investment reduces our impact on the environment and ensures that we have sustainable, cost-effective energy now and in the future,” said Robert Stone, vice president of operations at Bishamon.

Bishamon has undertaken other initiatives to reduce the environmental impact of its operations. The company discontinued conventional painting of its products and instead installed an automated powder coat system, which resulted in the elimination of associated paint waste and waste water emissions. In addition, Bishamon recently installed new burners in its powder coat machinery to ensure NOX emissions are well below state and federal levels.