Intuition tells us that a smooth surface should shed water faster than a textured one. But a team of engineers from Boston University and the Massachusetts Institute of Technology have engineered a wrinkled surface that sheds liquid much faster than a smooth one, an innovation that has implications for a wide variety of materials that work better when dry. 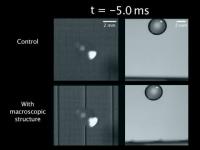 Caption: The clock at top shows how fast a drop bounces off a relatively smooth surface (top) and the ridged surface developed by the BU-MIT team (bottom).

In the cover story of the Nov. 21 issue of Nature, BU Assistant Professor of Mechanical Engineering and Materials Science & Engineering James C. Bird, and collaborators in the Varanasi group at MIT’s Department of Mechanical Engineering, demonstrate a counter-intuitive phenomenon. By adding a subtle, wrinkle-like texture they created surfaces that appear to shed drops faster than any previously engineered material.

“We’ve demonstrated that we can use surface texture to reshape a drop as it recoils in such a way that the overall contact time is significantly reduced,” said Bird, the paper’s lead author, who directs the Interfacial Fluid Dynamics Laboratory at Boston University. “The upshot is that the surface stays drier longer if this contact time is reduced, which has the potential to be useful for a variety of applications.”

Such surfaces may improve the performance of systems that operate better under dry conditions, such as steam turbines or aircraft wings. Furthermore, the approach may help cold surfaces resist icing by shedding liquid drops before they freeze.

Adding tiny ridges to a surface, they found, alters the way water drops react when they strike and causes them to bounce off quicker. Prior to adding the ridges, a drop would spread out to a maximum diameter, retract until the edges of the drop met its stationary center point and bounce off. With the introduction of the ridges, the center point moved to meet the edges as the drop recoiled. The drop then split in two before jumping off the surface.

This single innovation reduced contact time from 12.4 to 7.8 milliseconds, or about 37 percent. The experiment produced the shortest contact time achieved in the lab under comparable conditions, based on peer-reviewed studies going back to the 1960s.

“We reduced the distance the drop had to move by redistributing its mass,” Bird explained. “We introduced larger-scale ridges that were much bigger than the microstructure on the surface, but much smaller than the thickness of the drop. The ridges were large enough to influence the hydrodynamics but not so large that they would immediately split the drop.”

The team demonstrated that this approach works on a variety of surface materials, and even noted that natural water-shedding surfaces like butterfly wings and nasturtium leaves possess similar properties.

The researchers drew upon funds from the National Science Foundation and Defense Advanced Projects Research Agency. Bird and his MIT collaborators—senior author Kripa Varanasi, Rajeev Dhiman and Hyuk-Min Kwon—have filed patents on the methods described in the Nature paper.