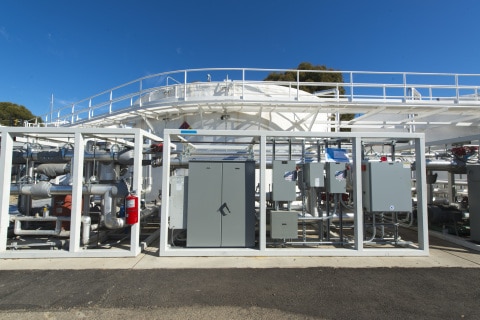 Monday night was a momentous occasion for CleanWorld, the US anaerobic digestion company that has drawn global attention to Northern California for its success in developing, building, and operating proprietary, US-made technologies that produce renewable natural gas and bioelectricity from food and organic waste.

Competing against a field of sixteen applicants representing bioenergy projects across the globe, CleanWorld received the highly sought “International Bioenergy Project of the Year” at the Renewable Energy World – Power Engineering Awards Gala in Orlando, Florida for its ground-breaking Sacramento BioDigester facility in Sacramento, California. CleanWorld edged out bioenergy projects from four continents.

The Sacramento BioDigester, the largest anaerobic digestion system of its kind in North America, converts 25 tons of food waste per day into various forms of renewable energy including heat, electricity, and natural gas, in addition to producing fertilizer and soil enhancements for California farms. The success of the Phase I facility had the company announce the groundbreaking of a Phase II facility that would expand its size three-fold, to 100 tons per day of food waste, or nearly 40,000 tons per year.

The facility will produce 700,000 diesel gallons per year of renewable CNG and prevent the release 18,000 tons of CO2 into the atmosphere, while also producing eight million gallons a year of organic soils and fertilizer products for Sacramento area farms and generating one million kilowatts of electricity to be used to power the facility and the adjacent fueling station. The fueling station produces the only commercially available fuel that has negative carbon intensity in the US, meaning it destroys more carbon than it creates.

Due to its tremendous economic and environmental benefits, the Sacramento BioDigester has vaulted Sacramento to the forefront as a central hub for the clean technology industry. Since it’s commissioning in January of this year, numerous government, state, and international officials, industry leaders, businessmen, and environmental engineers have toured the facility.

“CleanWorld is tremendously excited to see our anaerobic digestion technology receive widespread attention and recognition in the US and around the globe,” said Michele Wong, Chief Executive Officer for the Northern California based company.

Power Engineering, the voice of the power generation industry, engages with more than 70,000 power generation professionals that subscribe to the magazine annually for consistent coverage of industry news and trends. Renewable Energy World as well has over 55,000 magazine subscribers and is the largest source for information on the renewable energy industry. The runner up for the bioenergy category was Nexterra’s Renewable Energy CHP Project at the University of British Columbia in Vancouver.

CleanWorld is also currently constructing the UC Davis Renewable Energy Anaerobic Digester (READ) at the former UC Davis landfill, slated for completion in December which will convert 50 tons per day, nearly 20,000 tons per year, of food waste into electricity to power the University of California, Davis campus. In 2012, the company also placed into service the American River Packaging BioDigester in Natomas, California, which produces electricity for the box manufacturing company. “Anaerobic digestion of food waste is the future of energy,” Wong said. “And CleanWorld, as the North American leader in this industry, will continue to lead the charge.”

CleanWorld’s proprietary anaerobic digestion technology, developed at the University of California, Davis, and fabricated and constructed in California, utilizes natural microbes to break down organic waste, generating biogas and other forms of renewable energy. CleanWorld’s BioDigesters are pre-fabricated, value-engineered, and modular-by-design, and require no additional water as do many AD facilities – meaning the system is less expensive, significantly shortens construction time and has a much smaller footprint.