A new study of re-growing tropical forests has concluded that plant biodiversity takes longer to recover than carbon storage following major disturbances such as clearance for farming.

The findings, published in the scientific journal Proceedings of the Royal Society B, have important implications for conservation since there are now many re-growing forests in South and Central America. The new study is the first large-scale analysis of the recovery of both plant biodiversity and carbon pools in re-growing forests. 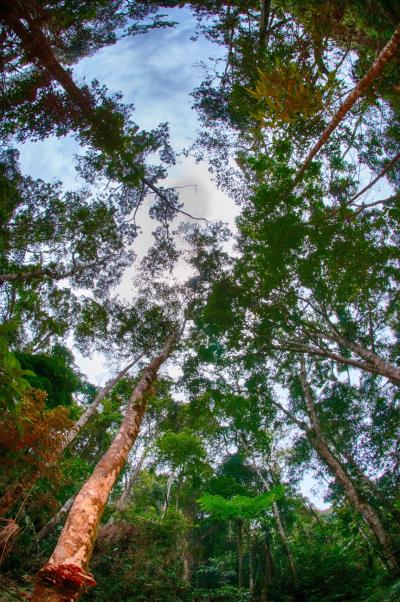 Over half of all tropical forests have already been converted for agriculture, logged or burnt in the recent past. Re-growing forests could help both to soak up carbon emissions produced by human activities and to reduce species’ extinctions.

The scientists, from the Centre for Ecology & Hydrology and Bournemouth University, concluded that although carbon recovered most quickly, even after 80 years re-growing forests tended to have less carbon than old-growth forests. This is probably because these forests are often dominated by small, fast growing trees. It may take centuries for larger trees which hold more carbon to become established.

In contrast, although the number of tree species recovered relatively rapidly, many species characteristic of old-growth forests were rare in re-growing forests. This is worrying because these species are probably those most vulnerable to extinction.

The research team conducted a synthesis of data collected from more than 600 secondary forest sites from 74 previous studies, describing carbon pools and plant biodiversity. Each site had comparable data for a nearby site that was relatively free of human disturbance.

Lead author Phil Martin, a PhD student at the Centre for Ecology & Hydrology, said, “We think plant species normally found in old-growth forests are failing to colonise re-growing forests because their seeds never get there. These recovering forests are often far from old-growth forests and surrounded by farmland. This means forest animals cannot move seeds between the two forests.”

Phil Martin added, “We suggest that when conservationists aim to restore tropical forests they should help dispersal of seeds from undisturbed to re-growing areas by planting trees throughout the wider landscape.”

In the study the researchers point out that these results show that forests that are re-growing following agricultural use may be more valuable for the carbon they store than for their biodiversity for the first 100 years. Policies such as Reducing Emission from Deforestation and Degradation (REDD) often assume that carbon and biodiversity are interchangeable. This work shows this is not the case.

Co-author Professor Phil Martin, from the Centre for Ecology & Hydrology said, “Our results clearly indicate that preservation of old-growth forests is vital for the conservation of specialist species. While the re-growth of forests following clearance is valuable in soaking up carbon, the biodiversity benefits will take a very long time to emerge.”

Princeton study: Amazon deforestation could mean droughts for western US »