I have always contended there is sustainable energy to be had in many available places to which we pay little attention, that either get forgotten or completely ignored. Try the wind generated from vehicles on expressways, or the force of water running inside water and sewer pipes. This press announcement on energy in the urban underground is refreshing. 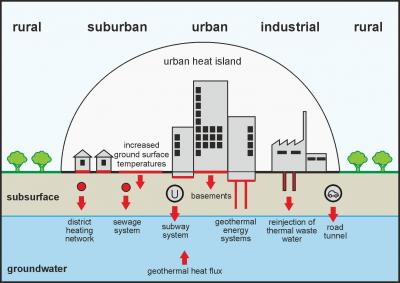 Where does the heat in the underground of large cities come from? Researchers analyzed various factors.
Credit: (Graphics: AGW/KIT)

Vast energy sources are slumbering below big cities. Sustainable energies for heating in winter and cooling in summer may be extracted from heated groundwater aquifers. Researchers from KIT and ETH Zurich developed an analytical heat flux model and found that increasing heat in the underground is mainly caused by an increase in surface temperatures and heat release from buildings. Work of the scientists is now reported in the renowned journal “Environmental Science and Technology” (DOI: 10.1021/es401546u).

Temperatures in big cities are far above those in the surrounding rural area: Dense settlement, surface sealing, industry, traffic, and lacking vegetation cause an urban microclimate with increased temperatures in the atmosphere. Temperature anomalies also develop in the underground. They spread laterally and vertically. In the past decades, groundwater in conurbations heated up considerably.

“In Karlsruhe, the average heat flux density into subsurface aquifers was 759 milliwatts per square meter in 1977. In 2011, a heat flux density of 828 milliwatts per square meter was reached,” says Junior Professor Philipp Blum, Head of the Engineering Geology Division of the KIT Institute of Applied Geosciences (AGW). “This amount of heat corresponds to 1 petajoule per year and would suffice to supply at least 18,000 households in Karlsruhe with heat.”

In cooperation with Kathrin Menberg and Axel Schaffitel from KIT and Dr. Peter Bayer from ETH Zurich, Philipp Blum also studied the origin of heat in the underground of conurbations. The scientists developed an analytical heat flux model to examine factors, such as the increase in temperatures of sealed surfaces, heat release from buildings, sewage ducts, and underground district heating networks as well as discharge of thermal waste water. By modeling anthropogenic heat fluxes into the underground of the city of Karlsruhe, the researchers determined long-term trends of heat flux processes. They found that the increased surface temperature and heat release from buildings in particular are responsible for the increase in temperatures in the subsurface area.

The energy from close-to-surface groundwater aquifers might be used for heating in winter and cooling in summer via geothermal heat pumps and groundwater heat pumps. Use of this geothermal potential would not only cover part of the growing demand for energy, but also reduce the emission of greenhouse gases, which would counteract heating of the cities.

Scientists wary of shale oil and gas as US energy salvation »