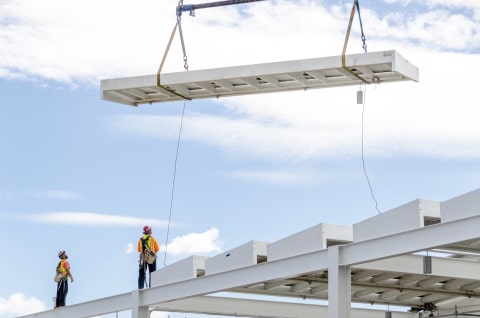 NRG Energy, Inc. and the San Francisco 49ers today announced a construction milestone – the completion of phase one of the solar installation at Levi’s Stadium, the future home of the 49ers. This significant step will help Levi’s Stadium to become the first stadium that is home to an NFL team to have sustainability and LEED certification standards incorporated into its design and architecture

The 49 solar frames installed are part of the stadium’s NRG Solar Terrace on the West side of the venue. The solar frames cover 9,574-square-feet of the suite roof with a total of 544 SunPower E20 Series solar panels, with an efficiency of 20 percent. Once completed, Levi’s Stadium will also include three solar panel covered NRG Energy Bridges, which will serve as the main entry and exit to the stadium, demonstrating NRG’s customizable and iconic solar installations.

“The vision for Levi’s Stadium has always been to create a venue that is an economically and environmentally sustainable showcase for innovation,” said San Francisco 49ers President Gideon Yu. “With phase one of the solar installation now complete, we are one step closer to making that vision a reality. As we continue to implement sustainable and environmentally conscious features throughout Levi’s Stadium, we will remain focused on pursuing creative avenues to make our region stronger in a variety of ways.”

In total, the solar arrays at Levi’s® Stadium should have a combined peak capacity of about 375 kW. The amount of solar energy generated annually is expected to be enough to offset the power consumed at the stadium during 49ers regular season home games.

“As its many championships demonstrate, the 49ers ‘lean in’ on what is important to their organization and their fan base. We are very pleased that their clean energy objectives for the new stadium demonstrate their far-reaching commitment to sustainability. NRG is honored to be the 49ers partner and proud to help establish Levi’s Stadium as the new paradigm in green stadium design,” said David Crane, President and CEO of NRG. “It’s an exciting time to see the project progressing with the installation of these 49 frames and we look forward to the stadium’s inaugural season, both for football and the wider adoption of clean power.”

NRG is producing clean, renewable solar-powered electricity on a commercial and utility scale through a diverse portfolio of solar projects across the U.S. and has more than 2,000 MW of photovoltaic and solar thermal projects in operation, under construction or in development across the United States. As the sustainable energy partner of the 49ers, NRG will continue to explore other opportunities to help enhance the stadium’s sustainability efforts.

Levi’s Stadium is one of five NRG projects at venues that play home to NFL teams. Other NFL venues, including FedExField, Lincoln Financial Field, MetLife Stadium and Patriot Place have partnered with NRG to showcase renewable energy to their fans. NRG and these NFL teams have similar strategies: invest in a solid combination of proven strengths, flexibility and promising potential to form a balanced approach toward one sustainable goal.