Our thanks to Mathias Maehlum from Energy Informative for providing GBE readers with a second informative articles on solar energy leasing. His next article “NREL Sets New World Record with Two-Junction Solar Cell,” will be published this weekend.

The solar PV market has been though a lot of changes in the last couple of years. Since Solarcity introduced the model of zero-down solar leasing back in 2006 many solar providers (including SunRun, Sungevity, SunPower and Real Goods Solar) have followed suit. Third-party-ownership has become the preferred way to go solar in many of the solar states across the country. A study conducted by PVSolarReport found that 70% of all Californians now prefer third-party solar. 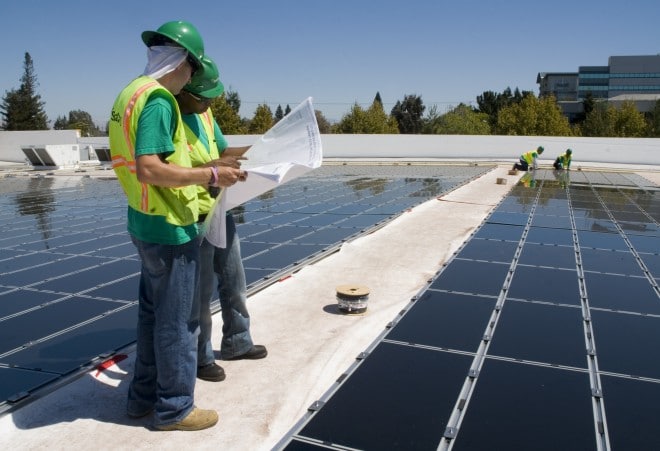 SolarCity announced that they have started offering zero-down solar leasing in new home communities. This means that homebuilders can integrate solar panels in their residential communities, and according to SolarCity, “homebuyers can save up to 20 percent on their energy costs from the very first day they move in”.

EIA (Energy Information Administration) says the residential sector contributed to 20% of all carbon dioxide emissions last year – there`s clearly a lot of potential for lowering our carbon footprint by being smarter about energy use in our homes.

A residential solar system is an excellent replacement of other carbon-based electricity sources. Thanks to federal and state incentives, solar panels also makes a lot of sense financially. One Block Off the Grid reports that the average homeowner saves over $1200 a year on electricity by going solar.

Whether or not a lease or a power purchase agreement (PPA) would be the best approach in your situation depends. As a general rule of thumb, if you can afford to pay with cash upfront, or if you can finance the solar system through a well-structured loan, then you should avoid third-party-ownership. The truth to the matter is that in terms of long-term savings, ownership beats a lease or a PPA every time.

SolarCity is offering zero-down solar leasing for new homes in Arizona, California, Colorado, Maryland, New Jersey and Oregon, and plan to expand the program to other states in the months to come.