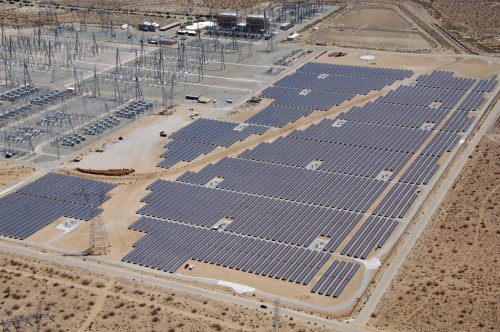 The Los Angeles Department of Water and Power today commissioned an 11.4-megawatt DC solar installation featuring more than 46,000 solar panels from SolarWorld, the largest and most experienced solar manufacturer in the western hemisphere. (Photo: Business Wire)

IKEA has been on a roll recently, and has been installing solar systems for many stores across the United States, China, and the United Kingdom as part of its 100% clean energy initiative. They even intend to start selling solar panels in the U.K.

IKEA partnered with Gehrlicher Solar America Corp for this new project. Construction of the project will commence next spring, and should be completed by next summer. The solar panels will be installed on the roof of the 58,575 square foot store expansion. The solar system, which consists of 1,248 solar panels requires 51,516 square feet of space.

The electricity generation capacity of the project is to be 312 kW, with a projected annual generation of 383,200 kWh, bringing the combined clean energy capacity of that store branch to 1,078,200 kWh annually.

That is the equivalent of removing 761 tonnes of CO2 from the atmosphere. That is comparable to the emissions of 158 cars, or the emissions associated with 105 homes.