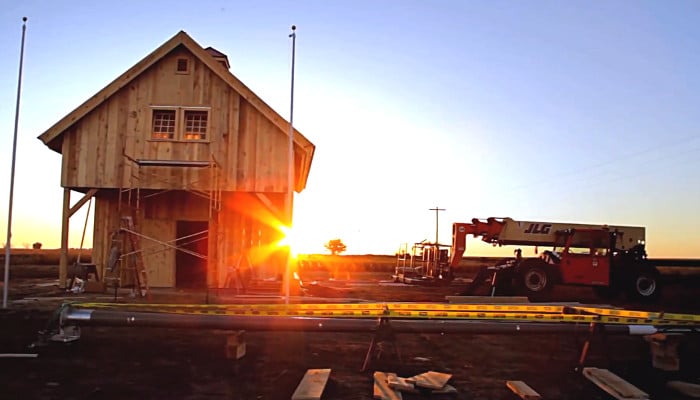 A group of farmers and ranchers in Nebraska are fed up with TransCanada’s proposed Keystone pipeline, and they are fighting to block it with everything they’ve got. Most recently, the group moved to physically block the pipeline – by building a fully sustainable “green” barn right in the Keystone’s proposed path! Here’s more on that story, which originally appeared on GBE’s sister site, Gas 2. Enjoy!

Nebraska Farmers Build a Barn in the Path of Keystone Pipeline

“Farmers and ranchers in Nebraska didn’t ask to do business with TransCanada,” says the no-nonsense voice-over, “and TransCanada isn’t asking to do business with us.” That idea – that TransCanada is pushing their Keystone XL pipeline on them using political force – is the motivation behind a group of Nebraska farmers and ranchers. “They tried to bully us,” the voice continues. “They told us it was a done deal, but they didn’t know much about Nebraskans.” Said Nebraskans, by the way, who built a sustainable, green-tech embracing barn right in the proposed path of the pipeline, symbolically blocking its progress while, at the same time, nicely highlighting why it simply isn’t needed.

The group behind the Keystone XL-blocking barn project has a number of great quotes throughout the two-and-a-half minute video, put on YouTube under the name “This Barn” on the “We Love Our Land” channel. They go on to add that, “if TransCanada gets what they want, they’re going to have to tear up sustainable energy to keep their dirty, dangerous tactics.” This is followed up by a fantastic call to action for President Obama (who, by the way, lost Nebraska to Mitt “Mittens” Romney), stated simply as “there is no way President Obama would let that happen.”

As you watch the video, below, it’s important to realize these aren’t tree-hugging hippies who have no sense of personal responsibility. These are people who say “it’s up to you to make the farm work,” and live it. These are the people who are on the front lines. They know that it’s oil, not ethanol, that’s raising food prices. They know that tar sand oil destroys land, and they know that pipelines destroy towns. They can see through the baloney, in other words – even when ignorant, stupid, and awful people like Congressman Joe Barton (R-TX) and the many commenters voicing their support for Keystone and TransCanada in Gas 2’s comments can’t … and they say they can’t be bought.

Source | Photos: We Love Our Land.