Thanks to John Perlin for providing GBE with this intro to his book on the history of solar energy. We published information about this book on October 4, concluding that we would provide an introduction from Perlin today for the book.I believe anybody who is interested in the subject will find this to be  book well worth the read. 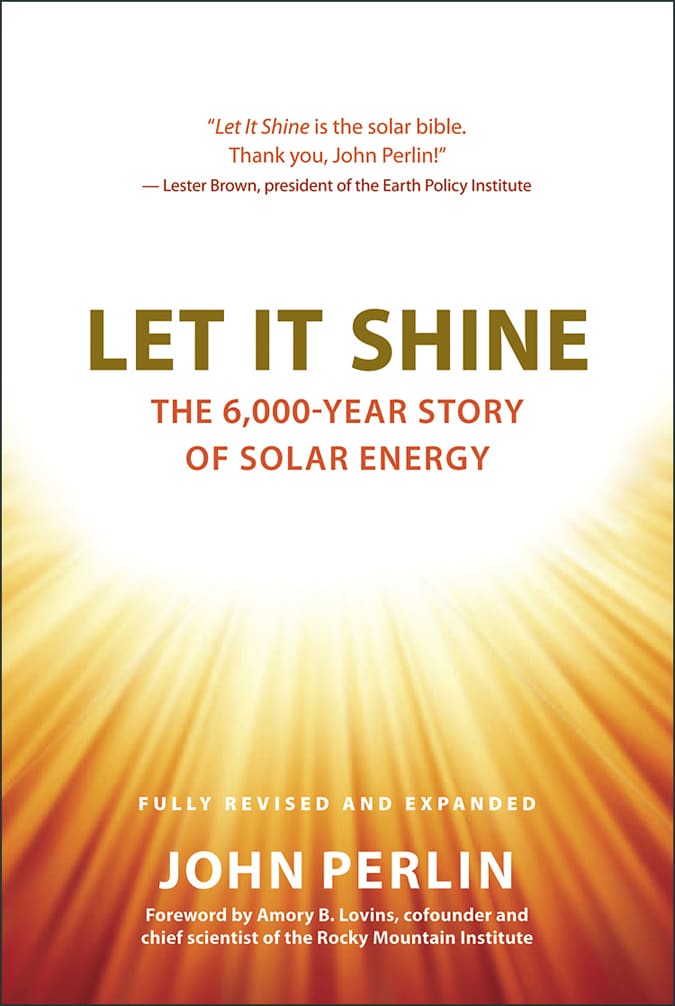 Many believe that solar energy is a late twentieth-century phenomenon.  Let It Shine: The 6000 Year-Story of Solar Energy will change this misconception. Let It Shine shows, for example, that six thousand years ago the stone-age Chinese built their homes so every one of them made maximum use of the sun’s energy in winter. So begins the story of the genesis of solar energy told in Let it Shine, the world’s first and only comprehensive history of humanity’s use of the sun. Page after page the story brings to light information never before unearthed. Three thousand years ago the Chinese developed bronze concave mirrors to focus sunlight onto combustibles to start their cooking fire. Just recently dozens of these solar igniters – called yang-suis have been unearthed by archaeologists, making them the oldest extant solar device. 2500 years ago, for example, the sun heated every house in most Greek cities. Years later ancient Roman architects published solar self-help books to show people how to save on fuel as firewood became scarce, and fleets scoured the known world for much needed supplies. During the renaissance Galileo and his contemporaries planned the construction of sun-focusing mirrors to serve as the West’s ultimate weapon against its Islamic enemies. Leonardo da Vinci entertained more peaceful applications. He aimed at making his fortune by building mirrors a mile in diameter to heat water for the Florentine woolen industry. Much later, during the industrial revolution, engineers devised solar-run steam engines to save Europe from paralysis should it run out of fossil fuels. As electricity began to power cities, the first photovoltaic modules joined the grid on a New York City rooftop in 1884. More than one hundred years earlier a Swiss polymath modeled global warming by trapping solar heat in a glass-covered box just as carbon dioxide holds in solar heat above the earth. Using the same type of glass-covered box to harvest solar energy, enterprising businessmen established a thriving solar water industry in California at the beginning of the 1880s!  Let it Shine brings to light newly discovered documents suppressed by the Nixon, Carter and Reagan Administrations, that if known at the time by the public and the Congress, solar energy would have definitely played a larger role in the American energy scene during the last forty years.

Let it Shine presents the step-by-step development of solar architecture and technology and pertinent energy policies. By providing the background for today’s vibrant solar industry, a deeper understanding emerges of how solar energy applications have evolved and performed and their promise for today’s world . The book is not merely a technological treatise though. It highlights the context in which these developments have occurred and the people who have made the solar revolution possible, revealing a whole new group of unknown technological pioneers, as well as people famous for other accomplishments never before known for their work as the solar advocates and technologists they were. Who would think Socrates as a solar promoter? Yet in a work by his admirer Xenophon, Socrates presents the basic plans for designing a solar house. Vitruvius, a Roman famous to this day as the architect of architects, transmitted the wisdom of the Greeks on building with the sun. Did you know that the first aspiring solar entrepreneur was Leonardo da Vinci? Einstein’s famous treatise on Light Quanta, which won him the Nobel Prize, definitely qualifies the great scientist to be regarded as the father of modern photovoltaics. Then there are the forgotten ones like Gustav Vorherr, who opened up the first school of solar architecture during the 1820s in Munich and his mentor, Dr. Bernhard Christoph Faust, the first person to write a complete book on a solar topic. Thousands of newly trained solar architects trained in the work of Faust fanned out to build solar homes throughout Europe. Sympathetic despots of Bavaria and Prussia required their subjects to build following the teachings of these men, resulting in many solar structures going up in Europe during the first half of the nineteenth century. The climax of their work was the transformation of an urban area in Switzerland becoming the first modern Sun City.  And who has heard of Williams Grylls Adams and Richard Evans Day, discoverers in 1876 of photovoltaics, or Charles Fritts, who put up the first roof-top solar array on a New York building in the 1880s?

These are but a sampling of what’s to be found in the blogs based upon Let it Shine.

I Early Use of the Sun

II Power from the Sun


« How Detergent In The Atmosphere Is Regenerated