How Detergent In The Atmosphere Is Regenerated

For all of the junk we put into out atmosphere, there is at least some positive news to keep on file about how the atmosphere has cleansing agents. Read the press information below from AAAS. 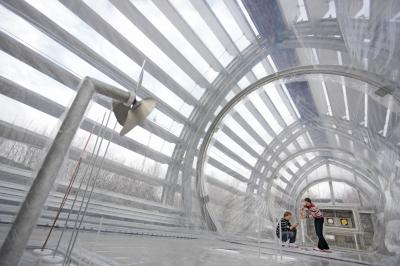 Hydroxyl (OH) radicals – known as the detergent of the atmosphere – decompose isoprene in the air. This leads to the creation of new OH radicals, which are then able to purify the air of other pollutants and trace gases. The scientific community had previously only been able to speculate about this mechanism.

The atmosphere has an astonishing ability to cleanse itself. Chemical processes ensure that trace gases and pollutants are removed from the atmosphere – such as isoprene, which is largely produced by forests. Without these processes global warming would be even more severe and , air quality much poorer. Just a few years ago, scientists thought that the degradation of isoprene considerably reduced the concentration of OH radicals. During studies in China, troposphere researchers from Jülich’s Institute of Energy and Climate Research simultaneously determined high concentrations of both OH radicals and trace gases such as isoprene. Other research groups made similar observations in the air above North American forests and tropical rainforests. The obvious conclusion was that during isoprene degradation something happens to regenerate the OH radicals. “In the past few years, there has been an intensive discussion in the scientific community about what this mechanism could be. But without actual proof this remained pure speculation. Now we have succeeded in demonstrating this process,” says the Jülich troposphere researcher, Dr. Hendrik Fuchs.

The scientists recreated the natural conditions prevailing in the atmosphere above China and the tropical rainforests in the Jülich simulation chamber, SAPHIR. This chamber enables researchers to simulate the degradation of even slight quantities of trace gases. It is equipped with exactly the same measuring instruments as are used in field experiments. “It is only this particular combination that makes it possible to study the processes precisely. SAPHIR means that we enjoy unique conditions here at Jülich,” says head of institute Prof. Andreas Wahner. Jülich scientists were indeed able to confirm the basic principles of this mechanism and to quantify its impact on OH regeneration. The process takes place much faster than thought before, but not so effectively as some researchers had assumed.

Since the degradation process is now understood for isoprene, scientists can begin to quantitatively investigate feedback effects. Relations between self-cleansing processes in the atmosphere and the climate are particularly interesting for the Jülich researchers. More OH radicals in the air mean that more greenhouse gases such as methane can be degraded. Furthermore, in contrast to all other known mechanisms for the degradation of isoprene, less climate-damaging ozone is produced in the atmosphere than previously assumed. Moreover, the effectiveness of the process increases with air temperature. “We may possibly have identified an important interaction between air quality and climate change leading to the accelerated degradation of trace gases in an atmosphere that is heating up,” adds the deputy head of institute Dr. Andreas Hofzumahaus.