As food security becomes an increasingly important global issue, scientists are looking for the best way to maintain the organic matter in soils using different methods of fertilization and crop rotation.

Increasing the organic matter in soils is key to growing crops for numerous reasons, including increased water-holding capacity and improved tilth. Scientists have recently used the Canadian Light Source (CLS) to evaluate the effects of various sources of supplemental nitrogen fertilizer on the chemical composition of soil organic matter. Results of their experiments to study this question were recently published in the journal Biogeochemistry. 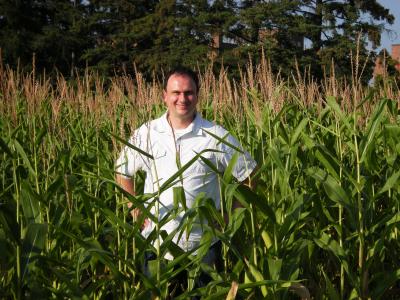 Dr. Adam Gillespie, a post-doctoral fellow with Agriculture and Agri-Food Canada, stands in one of the experimental corn fields near Ottawa.
Credit: submitted

“The big question I had when we started this research was how different nitrogen fertilizer supplements affected the overall soil organic matter composition,” says Dr. Adam Gillespie, a post-doctoral fellow working with Agriculture and Agri-Food Canada (AAFC). “We also wanted to look at how we could optimize the use of nitrogen, since nitrogen fertilizers can be a solution, but also a problem.”

Gillespie and his colleagues from AAFC, the University of Saskatchewan, St. Francis Xavier University, Lakehead University, and the CLS tested the hypothesis that the chemical composition of SOM would be different if the supplemental nitrogen originated from a synthetic fertilizer product, animal manure or a legume source.

The invention of synthetic fertilizer, where nitrogen is taken from an inert chemical form in the air and turned into ammonia, has had a profound effect on nitrogen cycling. In fact, astonishingly, humans have doubled the amount of available nitrogen in the biosphere.

According to Gillespie, 40 per cent of people alive today derive their nitrogen nutrition from synthetically-fixed fertilizer.

“Indeed, fertilization has had a profound effect on humanity as a whole. The downside of nitrogen fertilization is that run-off of nitrates to the surface waters or leaching of nitrates to groundwater cause problems with water quality and eutrophication in lakes. The recent algal blooms on Lake Winnipeg are a prime example of this nitrogen pollution. Secondly, nitrogen can be converted to nitrous oxide, which is an extremely potent greenhouse gas. Before fertilizers, nitrogen was introduced into the soil through rainfall or native pulse crops, so when fertilizer was developed, it revolutionized farming.”

He cites three common ways for producers to introduce nitrogen into soil: synthetic fertilizer; manure or other organic amendments; and through cultivation of nitrogen fixing pulse crops. For all these methods, the nitrogen comes in different forms. Synthetic fertilizer is available as a variety of commercial products, with different nitrogen-release times, whereas manure and pulse crops need to be broken down by microbial decomposition before nitrogen becomes available.

Gillespie explained that fungi is great at breaking down lignin in plants and bacteria can help break down the rest, but adds, “nitrogen shifts the ability of bacteria to compete, so we are hoping to find out more about the role of fungi in the decomposition of organic matter in soil”. Manure and pulse crops also add more organic matter to the soil, a benefit not realized using synthetic fertilizers.

The results of the experiment showed that organic matter in soil was heavily influenced by the type of supplemental nitrogen added.

“The overall trend showed that N additions allowed crop residues to decompose more completely. Specifically, we found less plant-type compounds in soils receiving nitrogen. In addition, we found that among the different nitrogen treatments, manure-enriched soil had the highest amounts of compounds related to microbial turnover,” said Gillespie. The findings will prove important for farmers and scientists alike as they work to maximize the potential growth of food while maintaining healthy soils.