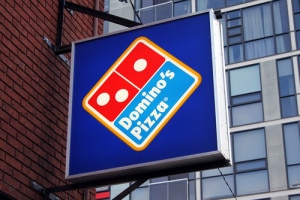 When you think of energy efficiency or green lighting, Domino’s Pizza is probably not what comes to mind. But Domino’s has actually now set the world record for “the most energy efficient restaurant lighting retrofit.”

The Domino’s restaurant that set the record is located at 28 West Blackwell Street in Dover, NJ.

“We have many ‘firsts’ across the public and private sectors, but Domino’s hits a special chord,” said Charlie Szoradi, CEO of Independence LED, the US company that supplied the LED tubes. “Back in the ’80s, I delivered Domino’s pizza to help pay for my University of Virginia undergraduate architecture degree. Decades later, the massive potential quarter billion dollars in cost savings across Domino’s worldwide footprint is part of in a global energy tipping point.”

Without a doubt, the massive financial savings from the retrofit is what drove Domino’s to make history. Over the course of the LED tubes’ lives, they are projected to save this Domino’s restaurant $25,000 ($2,400 per year).

A press release regarding the world-record retrofit also notes that, with over 10,000 restaurants around the world, Domino’s could save more than $24,000,000 per year and more than $250,000,000 over the lifetime of the LEDs if all of the locations implemented such a retrofit. (Of course, that’s some pretty broad extrapolation, but it does help to make the point clear — LEDs can save you a boatload of money.)

is the director of CleanTechnica, the most popular cleantech-focused website in the world, and Planetsave, a world-leading green and science news site. He has been covering green news of various sorts since 2008, and he has been especially focused on solar energy, electric vehicles, and wind energy for the past four years or so. Aside from his work on CleanTechnica and Planetsave, he's the Network Manager for their parent organization – Important Media – and he's the Owner/Founder of Solar Love, EV Obsession, and Bikocity. To connect with Zach on some of your favorite social networks, go to ZacharyShahan.com and click on the relevant buttons.
WebsiteFacebookTwitterGoogle+LinkedIn
Over 8700+ Readers