Hydrogen, one of this planet’s most abundant elements, draws clean energy evangelists with its powerful magnetism. What a wonder it would be for all of us to drive automobiles cross-country with nothing more than water vapor spewing from the exhaust pipe.

Unfortunately, as most hydrogen proponents will concede, using hydrogen as an energy source and storing it so you might be able to fill it up at a neighborhood service station has proven to be an expensive economic hurdle, demanding more research. The following heady scientific press announcement concerns researchers at the Institute of Physical Chemistry of the Polish Academy of Sciences in Warsaw. 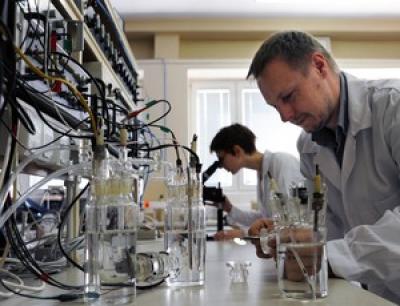 New membrane with multilayer structure allows — in combination with appropriate measurement techniques — for electrochemical studies on hydrogen permeation rate in reactive metals, including magnesium. The picture shows Dr Arkadiusz Gajek from the Institute of Physical Chemistry of the Polish Academy of Sciences in Warsaw.
Credit: IPC PAS, Grzegorz Krzyżewski

Good metal-based systems for hydrogen storage cannot be developed without knowing how this element permeates through metals. Researchers at the Institute of Physical Chemistry of the Polish Academy of Sciences in Warsaw managed to apply a user-friendly electrochemical method to study hydrogen diffusion in highly reactive metals.

Hydrogen is seen as a versatile energy carrier for the future. Unfortunately, the element practically does not occur in the free state on Earth. Therefore, it must be first generated (e.g., by electrolysis of water), then stored, to be finally used — ideally in fuel cells transforming chemical energy directly into electrical one. Hydrogen storage represents, however, a serious challenge. The drawbacks of conventional storage tanks for gaseous and liquid hydrogen force us to look for other solutions. One of the promising methods for hydrogen storage makes use of the capability of some metals and alloys to easily uptake this element. The development of efficient hydrogen storage systems requires, however, a detailed knowledge on how hydrogen diffuses in metals.

Hydrogen permeation through metals can be conveniently studied with electrochemical methods. These methods fail, however, for metals where the diffusion of hydrogen is relatively slow, and also in cases where metals strongly react with aqueous electrolyte solutions. The problem relates in particular to magnesium and magnesium alloys that are considered the most attractive materials for hydrogen storage. “We managed to overcome this obstacle”, says Prof. Tadeusz Zakroczymski, whose team at the Institute of Physical Chemistry of the Polish Academy of Sciences (IPC PAS) in Warsaw has been for many years carrying out comprehensive research on hydrogen permeation, diffusion and uptake in metals.

The information on how hydrogen diffuses in metals is usually obtained from electrochemical measurements of the rate of hydrogen permeation through a sample being usually a membrane separating two independent electrolytic cells. On one side the membrane is charged with hydrogen produced cathodically in an aqueous solution. The electrochemical charging is simple and very efficient. “A relatively low cathode current density, in the range of miliamperes per square centimeter, can correspond to a pressure of gaseous hydrogen in the range of a few tens of thousands of atmospheres”, explains Dr Arkadiusz Gajek (IPC PAS).

Hydrogen atoms enter the membrane, diffuse through it and subsequently leave the membrane on the other side. Here, due to appropriate conditions, they do not recombine but are immediately electrochemically oxidised to protons. This electrochemical detection of hydrogen is extremely sensitive. An easy-to-measure current density of one microampere per square centimeter corresponds a stream of about six trillion (6×10^12) single hydrogen atoms per second per square centimeter.

Prof. Zakroczymski’s team constructed a membrane that allows to electrochemically insert hydrogen into highly reactive metals, and — also electrochemically — to detect it. The membrane has a multilayer structure. The main layer, a structural basis of the membrane, is made of iron. This metal was selected because hydrogen atoms move exceptionally fast in iron crystal lattice: their rate of diffusion at room temperature is comparable to that of hydrogen ions in aqueous solutions. Therefore, the iron layer has a relatively small effect on the hydrogen permeation rate through the entire membrane.

Both sides of the iron membrane are coated electrochemically with a thin palladium film. Then they are coated with magnesium and (for protection purposes) again with palladium using PVD methods. Both elements were deposited in cooperation with Prof. Wen-Ta Tsai’s laboratory from National Cheng Kung University in Tainan, Taiwan.


« Can Solar Energy Help Save Greece?