A Journey Through the Natural Building Techniques: Cob

Hopefully, through my last articles, I’ve created a curiosity in many of you about the creative world of Natural Building. But before you decide to march off into your backyard, stick a shovel into the ground, and start building your very own cob cottage, it’s a good idea to have an understanding of what cob building actually is. 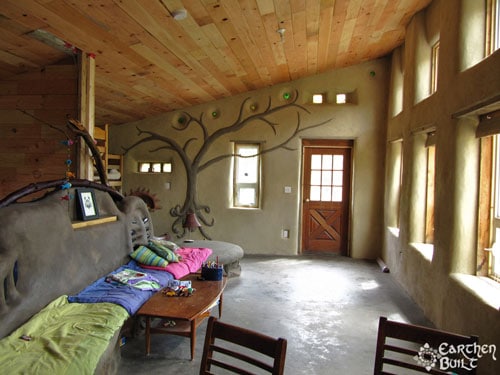 A Cob bench and South wall makes for a cozy living room. The Robinson’s family home.

If I had a dollar every time someone asked me if Cob means Corn on the Cob, I’d be a little richer! No, Cob, besides its similarity in name, has nothing to do with corn. The Old English word, in fact, means lump, which is just what the mix looks like. But don’t fret, your home won’t look like a big lump once you’re done with it!

Arched Cob bench and little nook. Even the wall is concave on this side. The Oasis home.

Given the malleability of Cob, one can shape their home in any which way they please. Cob is a monolithic building material, meaning no shuttering is needed. The walls don’t require forms and are not made of bricks. Instead, Cob is built up by hand in the shape you want, which is quite often fairly organic. Therefore, Cob lends itself exceptionally well for arch building, curved walls, nooks, and even load-bearing shelves and ledges.

The inherent strength of dry cob is such that the entire structure can safely bear the load of not just your books, but also your roof. In fact, your roof may end up being the weak point of your Cob home, as seen in Lloyd’s post Cob House Survives Falling Tree.

Naturally fireproof, load bearing, and proven on the earthquake simulation table, as demonstrated here, Cob is perhaps one of the safest building materials around. Cob is also appealingly affordable, and a great thermal-mass aspect to a passive-solar design (which I’ll talk about in a later post). It is a wonder why more homes aren’t built with this wonderful technique.

In England, where a great portion of the old homes were built with Cob, 70 years had gone by without a new cob home being built. That changed in 1994 when Kevin McCabe built a 2-storey, 4-bedroom Cob home. In North America it seems there have been many “first permitted cob homes”, and who knows how many non-permitted ones came before them. Hilde’s, built by Cobworks in 1999, is one of my favourites, while the Eco-Sense home has received a lot of well-earned media coverage. Both of these just happen to be off the coast of B.C. Canada.

Off the coast of B.C. we have a great amount of clay, making Cob an easily accessible building material. Being made of clay, sand, straw, and water, such readily accessible materials help make Cob much more affordable. One can often find that their building site is high-clay, and thus use the excavated material for building their home! On these islands, straw tends to be the harder got material in the mix, so it is a good thing straw makes up a small part of the Cob mixture. The balancing factor in the cost of your Cob home is more accurately found with the labour.

Cob makes for a robust and rugged structure. Oasis Workshop.

Once you have your materials, you are left with having to mix them and apply them to the wall. Ranging in cost, time, and energy input levels, you can mix cob by stomping on it with your feet, running back and forth over it with a push rototiller, or even spinning donuts on it with a bobcat or tractor. I have even met a man using a type of mortar mixer to mix his cob. If you have a large labour force, a lot of friends, or a big family, mixing by foot can be quite fun. If these people also happen to be free labour, or the type who “work for beer/food” then your budget may be in luck! Otherwise, my preferred method is using a bobcat. Not only does the bobcat need only one person (preferably 2), but it gets the job of ten done in half the time. It is also quite useful for scooping and lifting large loads of Cob up to higher wall sections, as opposed to tossing up manually manageable chunks of the mix one at a time. The downside of using a tractor is the fuel usage and the amount of space needed to spin these donuts.

After a much deserved doughnut break, the Cob must then end up on the wall. This is both the easy and the hard part. Easy in that all you really need to do is mush it down onto the foundation or lower layers. Hard, in that there are just a few important technical aspects to remember.

First, get your base wet and slipped with clay. This clay slip is like glue, and will help bond new, wet Cob to older, dry Cob, or even a different material.

Second, incorporate it all well. You want to make sure the separate lumps become one lump, so get in there with your thumbs and tools and really blend each layer.

Third, leave good key. This is very important when stopping for the day, or for any length of time. Don’t smooth out the top of your unfinished wall. Leave it chunky and pocketed so the next layer has something to grab onto.

Keeping the wall thickness consistent on this Cob oven.

Lastly, don’t get too skinny. Though many of us would like to slim up, our Cob walls don’t have the same desire. In fact, if you start to skinny-up your walls, you’ll be left with really thin and fragile walls at the top. Keep them a consistent thickness the whole way up. If, instead, they get fatter, not to worry, this can always be trimmed off with a saw. Ouch!

It’s one thing to build a sandcastle on the beach, and another to build a cob cottage on your land. Take the time to learn how to build with natural materials properly, and you’ll be rewarded with fantastically beautiful structures and the feeling of empowerment by creating something of such sustenance with your own hands. Here is a list of various Cob workshops you may want to look at. And remember, have fun!

Kata Polano is the owner/operator of Earthen Built, which specializes in the Artistry of Natural Building, Design, and Detail. She has been building with the earth since 2008, offering clients a healthy and creative alternative for their built environment. She currently lives in the West Kootenays, British Columbia, Canada.
WebsiteFacebook
Over 8700+ Readers