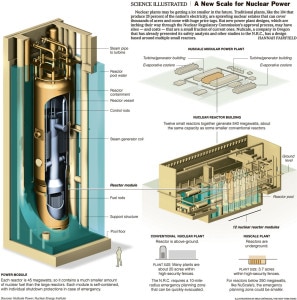 NuScale Power, LLC, announced today the launching of the Western Initiative for Nuclear (WIN) —a broad, multi-western state collaboration — to study the demonstration and deployment of a multi-module NuScale Small Modular Reactor (SMR) plant at a site like the Idaho National Laboratory location that would be operational by 2024. The WIN initiative was announced by NuScale Chairman and CEO, John Hopkins, following the Western Governors’ Association annual meeting held in Park City, Utah, this past weekend.

WIN is viewed as the initial demonstration project for a potential series of projects that may be developed in other states. The first NuScale plant will most likely be developed, built and owned by a consortium of regional utilities like WIN, and operated by one of these utilities.

“I applaud today’s announcement of the coalition to help develop and deploy NuScale Power’s small modular nuclear reactors,” said Governor John Kitzhaber of Oregon. “This carbon-free generation technology originated in the labs of Oregon State University and NuScale currently employs 250 people in Portland and Corvallis, showing how Oregon-based ingenuity is once again at the forefront of energy innovation.”

“As the home of our country’s largest nuclear power plant, Arizona and my administration have long benefited from safe, clean, reliable and economically-beneficial nuclear energy,” said Governor Jan Brewer of Arizona. “My state’s utilities continue to search for solutions to long-term, baseload energy needs, but we believe the Western Initiative for Nuclear and the NuScale small modular reactor hold great promise. I fully support this innovative effort to explore the potential of this cutting-edge technology.”

“As part of our SmartEnergy Initiative, Utah Associated Municipal Power Systems continually and carefully monitors and explores all resource options with an emphasis on conservation and efficiency to address the long-term energy needs of members. Project WIN is an example of our efforts to evaluate all options, particularly as we are faced with carbon-constrained baseload generation,” said Doug Hunter, general manager of Utah Associated Municipal Power Systems. “In accordance with state and national efforts to clean up our air and reduce carbon emissions, it is important that we investigate clean, safe, carbon-free SMR technology as a potential baseload resource.”

As the only U.S.-based company established solely for the commercialization of its SMR, NuScale has developed unique and proprietary break-through technology for an innovative, simple, safe, economic and scalable small modular reactor. Using proven light water reactor (LWR) technology, the NuScale Power Module is cooled by natural circulation, is entirely self-contained, and installed underwater and underground to maximize safety. With its unique design, the NuScale Power Module has achieved the Triple Crown for nuclear plant safety—to safely shut down and self-cool, indefinitely, with no operator action, no AC or DC power and no additional water. At 45 megawatts per module, the NuScale SMR design is attractive to markets that no other LWR SMR design can reach. A NuScale power plant can include as many as 12 NuScale Power Modules to produce as much as 540 MW.