The Amazon rain forest, popularly known as the lungs of the planet, inhales carbon dioxide as it exudes oxygen. Plants use carbon dioxide from the air to grow parts that eventually fall to the ground to decompose or get washed away by the region’s plentiful rainfall. 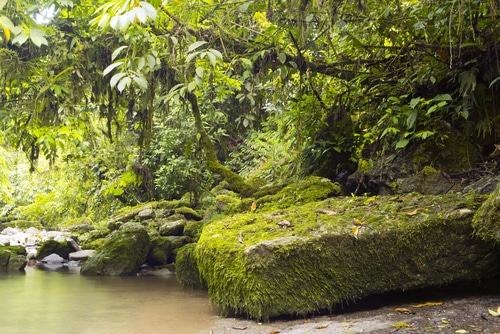 Until recently people believed much of the rain forest’s carbon floated down the Amazon River and ended up deep in the ocean. University of Washington research showed a decade ago that rivers exhale huge amounts of carbon dioxide – though left open the question of how that was possible, since bark and stems were thought to be too tough for river bacteria to digest.

A study published this week in Nature Geoscience resolves the conundrum, proving that woody plant matter is almost completely digested by bacteria living in the Amazon River, and that this tough stuff plays a major part in fueling the river’s breath.

The finding has implications for global carbon models, and for the ecology of the Amazon and the world’s other rivers.

“People thought this was one of the components that just got dumped into the ocean,” said first author Nick Ward, a UW doctoral student in oceanography. “We’ve found that terrestrial carbon is respired and basically turned into carbon dioxide as it travels down the river.”

Tough lignin, which helps form the main part of woody tissue, is the second most common component of terrestrial plants. Scientists believed that much of it got buried on the seafloor to stay there for centuries or millennia. The new paper shows river bacteria break it down within two weeks, and that just 5 percent of the Amazon rainforest’s carbon ever reaches the ocean.

“Rivers were once thought of as passive pipes,” said co-author Jeffrey Richey, a UW professor of oceanography. “This shows they’re more like metabolic hotspots.”

When previous research showed how much carbon dioxide was outgassing from rivers, scientists knew it didn’t add up. They speculated there might be some unknown, short-lived carbon source that freshwater bacteria could turn into carbon dioxide.

“The fact that lignin is proving to be this metabolically active is a big surprise,” Richey said. “It’s a mechanism for the rivers’ role in the global carbon cycle – it’s the food for the river breath.”

The Amazon alone discharges about one-fifth of the world’s freshwater and plays a large role in global processes, but it also serves as a test bed for natural river ecosystems.

Richey and his collaborators have studied the Amazon River for more than three decades. Earlier research took place more than 500 miles upstream. This time the U.S. and Brazilian team sought to understand the connection between the river and ocean, which meant working at the mouth of the world’s largest river – a treacherous study site.

“There’s a reason that no one’s really studied in this area,” Ward said. “Pulling it off has been quite a challenge. It’s a humongous, sloppy piece of water.”

The team used flat-bottomed boats to traverse the three river mouths, each so wide that you cannot see land, in water so rich with sediment that it looks like chocolate milk. Tides raise the ocean by 30 feet, reversing the flow of freshwater at the river mouth, and winds blow at up to 35 mph.

Under these conditions, Ward collected river water samples in all four seasons. He compared the original samples with ones left to sit for up to a week at river temperatures. Back at the UW, he used newly developed techniques to scan the samples for some 100 compounds, covering 95 percent of all plant-based lignin. Previous techniques could identify only 1 percent of the plant-based carbon in the water.

Based on the results, the authors estimate that about 40 percent of the Amazon’s lignin breaks down in soils, 55 percent breaks down in the river system, and 5 percent reaches the ocean, where it may break down or sink to the ocean floor.

“People had just assumed, ‘Well, it’s not energetically feasible for an organism to break lignin apart, so why would they?'” Ward said. “We’re thinking that as rain falls over the land it’s taking with it these lignin compounds, but it’s also taking with it the bacterial community that’s really good at eating the lignin.”

Photo: Limestone on Amazon in Equador from Shutterstock

A Journey through the Natural Building Techniques: Adobe »