A Journey through the Natural Building Techniques: Adobe 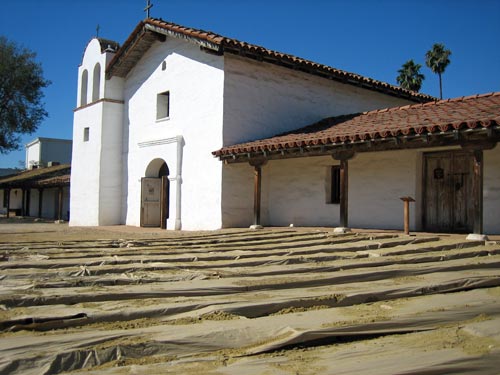 Adobe bricks drying in the sun in front of El Presidio Real de Santa Barbara, which was built in 1782 as a military installation, and the first home of the Spanish in Santa Barbara.
~photo by Kata Polano

So you want to build your abode with adobe.  Ok, I know that doesn’t rhyme, but I still find it a fun coincidence between these two words.

The word adobe comes from the Arabic word al-tob, which means “the brick” and from Coptic tube, which also means “brick”.  A brick is precisely what adobe is, a sun-dried brick of clay-soil and sand, with fiber added in some instances as well. These fibers, which add tensile strength, are usually straw, hair, or even horse manure. Yes, I said horse manure! Building with adobe is one of the oldest building techniques in the world, and some of the world’s oldest standing buildings were constructed with adobe.

Once upon a time, in a land far away, there was a group of people who faced the obstacle of building shelter for themselves. All they had was the clay underfoot, and the water from the nearby watering hole. Though I can’t tell you how they determined that mixing the two together, shaping them into rectangles, and stacking them atop one another would give them an amazing building material that was ideal for their situation, but they somehow did.

They probably started without the rectangles, making something more like cob (next article’s topic), and eventually adapted their technique to use bricks. During this time of invention and ingenuity, people also figured out that they could use their horses to mix their mud for them. They would tether the horse to a post in the centre of a shallow pit and have it walk circles around the post. Ob