For those who champion clean energy solutions, this Virginia Tech announcement concerning hydrogen is well worth the read. 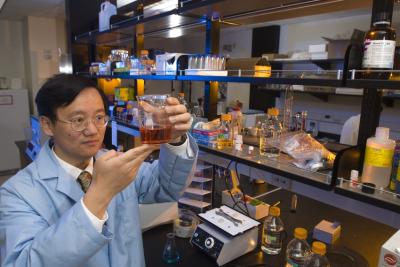 Percival Zhang, an associate professor of biological systems engineering in the Virginia Tech College of Agriculture and Life Sciences and the College of Engineering, has developed an inexpensive, environmentally friendly way to extract hydrogen from plants, a development that could drive the hydrogen fuel cell market.
Credit: Virginia Tech

A team of Virginia Tech researchers has discovered a way to extract large quantities of hydrogen from any plant, a breakthrough that has the potential to bring a low-cost, environmentally friendly fuel source to the world.

“Our new process could help end our dependence on fossil fuels,” said Y.H. Percival Zhang, an associate professor of biological systems engineering in the College of Agriculture and Life Sciences and the College of Engineering “Hydrogen is one of the most important biofuels of the future.”

Zhang and his team have succeeded in using xylose, the most abundant simple plant sugar, to produce a large quantity of hydrogen that previously was attainable only in theory. Zhang’s method can be performed using any source of biomass.

The discovery is a featured editor’s choice in an online version of the chemistry journal Angewandte Chemie, International Edition.

The U.S. Department of Energy says that hydrogen fuel has the potential to dramatically reduce reliance of fossil fuels and automobile manufactures are aggressively trying to develop vehicles that run on hydrogen fuel cells. Unlike gas-powered engines that spew out pollutants, the only byproduct of hydrogen fuel is water. Zhang’s discovery opens the door to an inexpensive, renewable source of hydrogen.

Jonathan R. Mielenz, group leader of the bioscience and technology biosciences division at the Oak Ridge National Laboratory, who is familiar with Zhang’s work but not affiliated with this project, said this discovery has the potential to have a major impact on alternative energy production.

“The key to this exciting development is that Zhang is using the second most prevalent sugar in plants to produce this hydrogen,” he said. “This amounts to a significant additional benefit to hydrogen production and it reduces the overall cost of producing hydrogen from biomass.”

Mielenz said Zhang’s process could find its way to the marketplace as quickly as three years if the technology is available. Zhang said when it does become commercially available, it has the possibility of making an enormous impact.