Chemists at the University of South Florida and King Abdullah University of Science and Technology have discovered a more efficient, less expensive and reusable material for carbon dioxide (CO2) capture and separation. The breakthrough could have implications for a new generation of clean-air technologies and offers new tools for confronting the world’s challenges in controlling carbon. 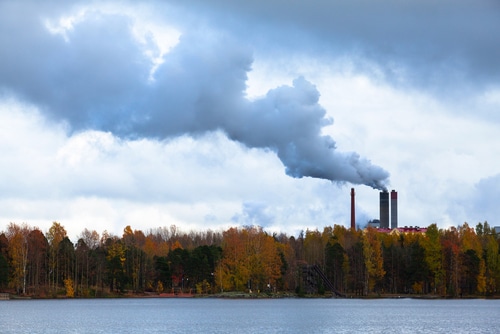 Publishing this month in the journal Nature, the international group of scientists has identified a previously underused material – known as SIFSIX-1-Cu – that offers a highly efficient mechanism for capturing CO₂.

The discovery represents more than an improvement over existing materials in terms of carbon capture, said USF Chemistry Professor Mike Zaworotko, noting that the material also is highly-effective at carbon capture even in the presence of water vapor, a standard that other materials have not been able to meet. This makes it a promising candidate for real-world applications. Water normally interferes with CO₂ capture, but the material developed in the USF-KAUST project resists it.

“I hate to use the word ‘unprecedented’ but we have something unprecedented,” Zaworotko said. “We sort of hit a sweet spot in terms of properties.”

The discovery addresses one the biggest challenges of capturing CO2 before it enters the atmosphere: energy costs associated with the separation and purification of industrial commodities currently consumes around 15 percent of global energy production. The demand for such commodities is projected to triple by 2050, the researchers note.

The problem is pronounced in capturing CO2, which in addition to its notoriety with climate change, is an impurity in natural gas, biogas and other gas streams, they said.

The material is a crystal whose atoms form a three-dimensional lattice with holes that snare molecules of CO2 but allow other molecules in air to pass. SIFSIX-1-Cu is an adaptation of a material created more than 15 years ago and is named after the chemical component that leads to the special properties; its chemical name is hexafluorosilicate.

Porous SIFSIX materials are built from combinations of inorganic and organic chemical building blocks and are part of a general class of materials known as Metal-Organic Materials, or “MOMs”.

The breakthrough is several years in the making and began with an undergraduate research project conducted by USF student Stephen Burd under Zaworotko’s supervision. Now a graduate student in chemistry, Burd’s initial testing of the material and discovery of its high-selectivity for CO2 then grew to involve an international research group involving USF chemists Brian Space, Shengqian Ma, Mohamed Eddaoudi (who is also a faculty member at KAUST) and graduate collaborator Patrick Nugent.

The research facilities at KAUST combined with the multidisciplinary expertise in Eddaoudi’s research group – which includes researchers Youssef Belmabkhout, Amy Cairns and Ryan Luebke – allowed the design of unique experiments that permitted the sorption (the physical and chemical process by which substances attach to each other) properties of this

class of materials to be unveiled. To confirm their findings, the researchers used supercomputer simulations in the National Science Foundation’s XSEDE network.

“We work with the experimental groups in a back-and-forth process,” Space said. “We tried to explain their data, and our results give them hints on how to change the way the material works.”

Space’s team used several supercomputers in the National Science Foundation’s XSEDE network for this work. They initially used Pittsburgh Supercomputing Center’s Blacklight to simulate the behavior of small numbers of gas molecules with each other and with the MOM material.

Predicting the exact behavior of even small numbers of molecules requires a huge amount of computer memory — more than one terabyte, greater than the RAM memory in a thousand brand-new iPads. Such calculations are a specialty of Blacklight, the largest “shared memory” computer in the world. The researchers then used the Blacklight results to simulate the behavior of the gasses and the MOMs in bulk on XSEDE computers Ranger, at the Texas Advanced Computing Center, and Trestles, at the San Diego Supercomputer Center.

The group believes the material has three potentially significant applications: carbon-capture for coal-burning energy plants; purification of methane in natural gas wells; and the advancement of clean-coal technology. Some 20 to 30 percent of the power output at a clean-coal plant is consumed by cleaning process. The new material could make those plants more efficient and put more power into the grid, the scientists predict.

The next step is to collaborate with engineers to determine how the materials can be manufactured and implemented for real-world uses.