A low-carbon solution to high-carbon energy resources such as coal is proposed by their high efficient integration with either nuclear or renewable energy, which may figure out the strategic solution to China’s future energy development. As a result, the research on “low-carbon hybrid energy system– strategic solution and development patterns for China’s future energy” has been published on SCIENTIC SINICA Chimica（in Chinese, No.1, 2013. 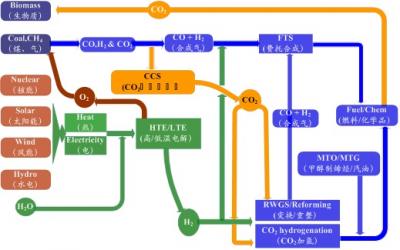 Coal dominated energy resources and consumption dominate the energy structure in China. This leads to the great challenges for China’s future energy development along with both growing demand for energy and high pressure for CO2 emissions reduction. From the earlier viewpoint, the reduction of CO2 emission could be reached by replacing fossil fuel by low-carbon energy resources for electricity generation. However, it gave rise to the questions. Is it possible to directly using low-carbon energy on the reduction of CO2 emission? Is there an efficient way to decrease the emission of CO2 by low-carbon energy, and utilize the C and O in CO2 to produce useful materials? Thus, a potential scheme is proposed to couple coal with the low-carbon energy via the high efficient integration, including nuclear, wind, solar, biomass and hydro power etc. Such a hybrid energy system may target both CO2 reduction and recycle on a large-scale.

The carbon flow for hybrid energy system is based on the utilization of carbon resources and the process of carbon recycling. High-carbon energy resources such as coal could be coupled with low-carbon energy resources such as nuclear energy and renewable energies by the effective integration between substances, energy and information. In principle, hear or electricity is generated by the low-carbon energy such as nuclear and renewable energy, then input to drive the high/low temperature electrolysis reaction and to provide H2 for high-carbon system. In this case, the water-gas shift reaction is replaced to suppress the CO2 emission. On the other hand, CO2 utilization could be carried out through CO2 hydrogenation. Consequently, both energy and carbon efficiency could be highly improved with a reduction of CO2 emission, and at the same time CO2 could be used as a resource.

Based on the above consideration, nuclear-assisted coal-based energy system and wind/solar-assisted coal (biomass)-based systems are analyzed as the case study for the preliminary techno-economic evaluations with detailed explanations provided. Such an integration is revealed to produce energy and chemicals with a simultaneous increase in both energy and carbon efficiency of fossil fuel. Hence, the low-carbon hybrid energy system can be considered as the potential solution to China’s future energy development.

Obviously, the low-carbon hybrid energy system has the advantages of both high-carbon resources (such as coal) and low-carbon energy resources (such as nuclear or renewable energy) for the production of liquid fuel and chemicals on a large scale. It focuses on the current energy situation in China, fits the direction of energy development in China, and provides the strategic solution to China’s future energy.