You may know the best bars and restaurants in town, but what’s the ‘walkable’ rating of your city or closest metropolitan area to your home?  Aside from fresh air, exercise, and the ability to bump into new and old acquaintances, walking is beneficial to the environment. 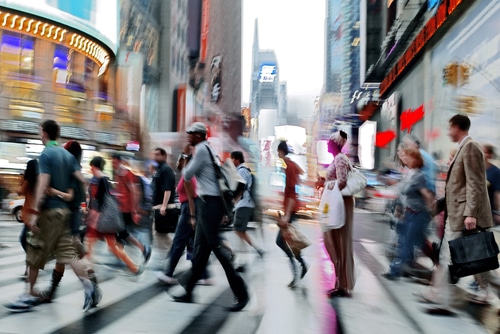 80 Americans are killed per day due to car-induced air pollution.  Car exhaust also contributes to bronchitis, asthma, and other avoidable health hazards. (1)  The amount of exhaust in the air is altered by your daily decisions.

Rather than drive, think about walking more.  A number of advocate groups celebrate a newfound urbanism developing throughout popular US cities.  The following cities usher in a new-defined sense of urban living, enticing inhabitants to walk about more often.

Where are the top places the walking is occurring? Take a look at this list from Walk Score:

NYC is known the world over for its fame and history, but what pleases many visitors is how easy it is to get around.  In terms of walkability, green New York comes in at the top spot, with a walkability score of 85.  Where are people walking in the big city?  Little Italy, the Flatiron District, and SoHo are among the most popular places to be in your walking shoes while in the Big Apple.

San Fran is about a half a step behind NYC regarding walkability.  Though Northern California does not reach the same temperatures as its southern portion, the sites and West Coast weather get many people in the Bay Area outdoors on a regular basis.  What are trending topics in the locale?  How do subjects like kid friendly, ice cream parlor, and patio bar strike your fancy?

No need for cars and horrible imitations of Bostonian accents, especially during spring and summer months in the East Coast city of Boston.  Tie your laces for a trot through the vogue city areas of Beacon Hill, Chinatown, Downtown Crossing, and the Bay Village, all with great, respective walking scores.  Boston offers street art and sidewalk cafes with an overall score of 79.

Chicago has as walk score of 74 and a transit score of 65, making the windy city great for visiting and inhabiting.  What do 2.6 million people do around town?  It’s likely they are in coffee shops in Printer’s Row or Dearborn Park; enjoying street art in Old Town; or, at a patio bar in Sheridan Park.

Philly is the 5th-most walkable city in the US.  It’s no wonder 1.5 inhabitants are walking around, whether it’s a bustling workweek in Center City or a relaxing afternoon in University City.  Where are people seeing the sites?  They are walking to Penn Park, the Philadelphia Art Museum, and Boathouse Row.  Don’t forget to weigh-in on what vendors offer the best cheese steak.

Seattle, with a total walk score of 74, serves host to most-popular strolling areas Denny Triangle, South Lake Union, and Belltown.  Residents embrace the ability to walk, as most of Seattle’s areas are engineered for foot traffic, allowing 68% walk score of 70 or above regarding the city’s peoples.

Washington DC gets a lot of attention throughout the world, hosting the nation’s political heads.  However, there are lots of pedestrian activities afoot in the DC metro area.  Ice cream shops, sidewalk cafes, patio bars, and others are popular social media tags aligned with the city.  Currently, Dupont and Logan Circle are two hot spots serving host to entertainment and community opportunities.

Miami, with an overall walk score of 73, gets attention for a lot more reasons than sunny skies and exciting nightlife.  Inhabitants keep smiling with the sun on their faces as they stroll through Overtown, Little Havana, Brickell, and other popular, locales within the southern city.

In Minneapolis, 59 percent of residents have a walk score of 70 or above.  The areas of Loring Park and Cedar-Riverside each serve host to over 7,000 inhabitants respectively.  What are some trendy topics in the city?  People in town seek opportunity to awe at architecture, get tasty treats at the farmer’s markets, and see amateur and professional displays of public art.

The Bay Area already has representation on the list as San Francisco is featured second. However, directly over the bridge in Oakland, people are just as delighted to take their feet out for a stroll, visiting the city areas of Lakewide, Old City, Chinatown, and the Civic Center.

Are your feet feeling itchy, ready to toe tap on popular US-city pavements?  The above are the most welcoming to those wanting to walk about.

Aaron Trussell is an environmental scientist. He enjoys sharing his research and insights on various business blogs. Learn about Environmental Data Resources, visit the link.