Jeff McIntire-Strasburg, founder and editor of Sustainablog, has been kind enough to provide this post on Dancing Rabbit’s planned community building and its plans for funding. 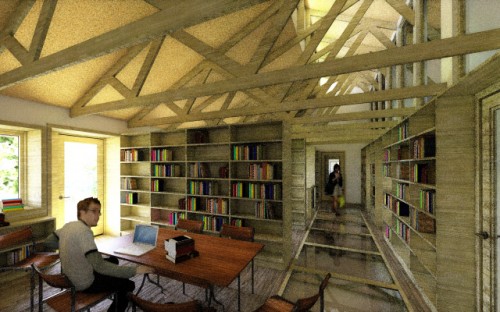 While the Fellowship for Intentional Community (FIC)does a great job of spreading the word about alternative communities and their potential, their own office space leaves a lot to be desired: a 1970s-era trailer is hardly the surroundings you’d expect for an organization promoting more sustainable lifestyles.

FIC doesn’t plan to stay in its trailer at Sandhill Farm much longer, though: down the road at Dancing Rabbit Ecovillage (where – disclosure – I’m a board member), plans for a new green community building are underway that will provide FIC with work space that better reflects the organization’s ideals.

OK, a green building at an ecovillage may not immediately strike you as newsworthy, but DR and FIC are aiming for something more than the typical common house: they’re planning a showpiece of natural and sustainable building technologies. Among the features planned:

Take a look at the community’s explanation of their plans.  Of course, such a building won’t be cheap, and FIC will be contributing to cover the cost of its office space. In order to raise half of the needed funds, they’ve launched a crowdfunding project on Indiegogo.

Want to get a sense at just how badly they need new office space? Check out their pitch video.

Time’s getting short – they’ve only got 10 days left on their campaign – so they’ll appreciate any help you can offer. Got thoughts about the planned building? Share them with us in the comments.

Jeff McIntire-Strasburg is the founder and editor of sustainablog, and a board member at Dancing Rabbit Ecovillage.


« The Forgotten Aftermath Of Natural Disaster: Cleaning Up