A new survey of experts argues that solar power will become much cheaper through 2025, while expanding greatly—but for these trends to continue for the long term, will require a commitment to funding research

Prices for solar modules—the part of solar panels that produce electricity—will continue to fall, in line with the long-term trend since 1980, according to a survey of experts by Near Zero, , a nonprofit energy research organization. However, for prices to keep falling for the long term will require continued commitment to research, such as on materials used for making solar modules. 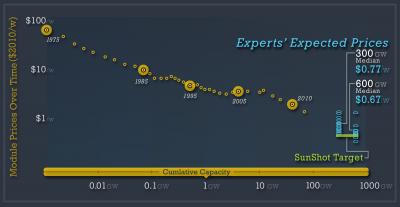 As the total amount of solar modules produced has increased over the past few decades (from left to right), the price per watt has also fallen. Prices 1975-2009 are from Nemet (2009), and prices for 2010 and 2011 are based on data from Navigant and Bloomberg New Energy Finance. Red circles indicate the expectations from Near Zero’s survey, for solar module prices at 300 GW and 600 GW of total installations (also called cumulative capacity). Also shown for reference in blue is the module price target of the Department of Energy’s SunShot Program.
Credit: Near Zero

To get a sense of what future prices for solar power are likely to be, as well as other challenges and bottlenecks that the industry faces, Near Zero conducted a formal, quantitative survey (an “expert elicitation”) that drew on from industry, universities, and national labs. Such surveys are a means of formally collecting expert judgments on a topic. By aggregating forecasts made independently by a variety of experts, the results reflect the collective wisdom of the group about how the solar power industry is most likely to develop, and also help to characterize the range of uncertainty about the future.

The survey asked experts for their expectations about future prices for modules as well as the expenditures for other parts of solar power systems, known as “balance of system” expenses. The experts were also asked how much solar power they expected would be installed in the coming years.

The experts expected the price of solar power systems will fall sufficiently that it will be far more competitive than it is today. The experts forecast a large expansion of the amount of installed solar power, increasing more than 10 times over the decade from 2010 to 2020, an expansion that will continue at a similar rate until at least 2025.

However, this success story is dependent on solar power prices continuing to fall, which will require continued and possibly increased levels of spending on research and development, the experts said. If solar power prices continue to fall as expected in the survey, then the large expansion of installed solar power could be achieved while requiring spending less each year than the world currently is spending on solar power installations. But if prices were to hold steady rather than falling, then the same expansion of solar power, over the period 2012 to 2025, would cost at least 50 percent more—adding up to several hundred billion dollars.


« Guest Post: How to Build a Solar Concentrator for Solar Hot Water