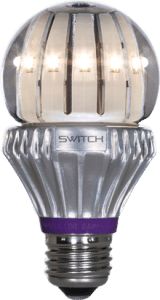 I work for a lighting company in Denver as a Lighting and Design Consultant and I cannot tell you how many times in a week that people will tell me they do not want to use a more sustainable light bulb because of two reasons:

I have had this experience myself. I’ve picked up a pack of bulbs and the color is different from one lamp to another in a single room. The color issue is an easy fix, either Reveal (Natural Light) or Soft White (a warmer indoor quality) but the refusal to save money and energy due to the shape of a bulb hasn’t had an easy alternative, until recently.

SWITCH Lighting has now designed a light emitting diode (LED) bulb that is much more industrial looking, like the standard incandescent bulbs, and demonstrates many of the same qualities that consumers like without the wasted energy.

They’ve been widely praised for their sleek industrial design and have even been featured as a work of art in several art galleries. In addition, the SWITCH75 was a Consumer Electronics Show 2012 Innovations Honoree, was named by TIME Magazine as one of the 50 Best Inventions of 2011 and also received a silver rating in the prestigious Edison 2012 Awards.

SWITCH was the maker of the first LED replacement bulb for incandescent light bulbs. Previously, you have been able to get the SWITCH60 which is the equivalent bulb to a 60-watt incandescent. But beginning this month you will now be able to purchase the SWITCH40 and SWITCH75. There will also be available the SWITCH100.

These LED bulbs are equivalent to incandescent bulbs with:

But they are superior to incandescent bulbs by:

SWITCH’s website jokes about what does it take to change a light bulb? But in reality it has taken eleven engineers over three years working with dozens of consultants and approximately 86,000 hours of research, having produced 1600 failed experiments and 30,000 LED chips to get to the point where now they’ve actually changed that light bulb into something sustainable and user worthy.

The bulbs use a specialized LQD cooling system that enables the LED to work and last without the heat that has previously been produced and lost.

Subway use of LED bulbs

The bulbs can be used in any standard base in residential, commercial, indoor, outdoor, restaurant, and hotel design. There is no limit and before you even purchase these bulbs the SWITCH website also allows you to calculate your savings by using the ROI/payback calculator, so you will know what to expect from this new technology.

SWITCH has selected Batteries Plus to partner with for the retail distribution of their new LED bulbs. They chose Batteries Plus because of the highly trained staff that will educated the public on the remarkable attributes and sustainable qualities of the new LED technologies.

With SWITCH’s new LED bulbs, the arguments that customers refer to are no longer valid. They have no concrete ground on why they won’t purchase the new bulbs once the price is just as equivalent as the design.