Planetary stewardship in an urbanising world: Beyond city limits

City leaders aspiring to transform their cities into models of sustainability must look beyond city limits and include in their calculation the global flow of goods and materials into their realm, argue researchers in the Royal Swedish Academy of Sciences journal Ambio. 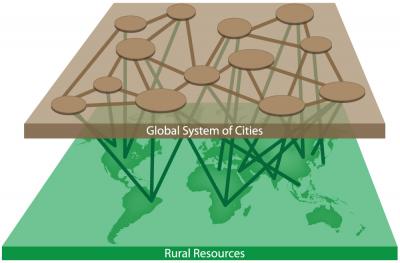 This is a global system of cities cooperating with rural regions for sustainable management of planetary resources. Credit: IGBP

Many cities are now developing sustainable strategies to reduce pollution and congestion, improve the quality of life of their citizens, and respond to growing concern about human impact on climate and the environment. But sustainable city initiatives often ignore the environmental footprint from imported goods and services such as food, water, and energy to cities: sustainability, it seems, stops at the city limits.

Ultimately, this will not add up to a planet able to support over nine billion people.

“The sustainability of a city can no longer be thought of in isolation from the combined resource use and impacts of cities globally.” Urbanization is no longer a local issue, say Earth-system researchers in a new paper, Planetary stewardship in an urbanizing world: beyond city limits, published October 2012.

Instead, the team proposes that cities analyse how resources consumed within a city are sourced, produced and transported. They suggest one solution could be that cities with viable sustainability strategies link together to create a vast system of cities. A feature of such a system would be an awareness of the global resource use of cities combined. The benefits of a network of this kind could be twofold, contributing to “planetary stewardship” whilst providing long-term resource security for cities.

The world has urbanized rapidly. In 2011, the United Nations announced humanity had passed a major landmark: over half the population of the planet now lives in urban areas. Urbanization is set to continue at pace throughout this century with most growth taking place in Africa and Asia.

The total urban area is expected to triple between 2000 and 2030, while urban populations are expected to nearly double, increasing from 2.84 to 4.9 billion, during this period, according to a recent publication in the Proceedings of the National Academy of Sciences of the United States of America.

“On this kind of trajectory, more than 15,000 football fields (FIFA accredited) will become urban every day during the first three decades of the 21st century. In other words, humankind is expected to build more urban areas during the first thirty years of this century than all of history combined,,” says Professor Karen Seto an urbanization expert from Yale University and co-author on the paper.

A system of sustainable cities will require adequate information on resource flows and their impacts, preferably in near-real-time and on a global scale. “Digital technologies are now putting this kind of information within our grasp,” says Dr. Seitzinger.

Recently, cities across the globe have joined forces in alliances to curb greenhouse gas emissions, for example through the C40 Cities Climate Leadership Group and the World Mayor’s Council for Climate Change. This approach allows cities to learn from one another. Good ideas can spread through the network while poor ideas can be ditched quickly.

However, these efforts may not focus explicitly on non-urban regions that often provide resources to urban areas. The notion of a partnership between “sustainable” cities and between cities and non-urban regions discussed in the paper is novel but untested. The new approach could harness existing partnerships and provide the foundations for a more sustainable approach to urbanization and urban living this century.