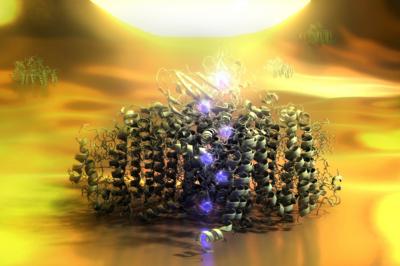 Photosystem-I (green) is optically excited by an electrode (top). An electron then is transferred step by step in only 16 nanoseconds.

A team of scientists, led by Joachim Reichert, Johannes Barth, and Alexander Holleitner (Technische Universitaet Muenchen, Clusters of Excellence MAP and NIM), and Itai Carmeli (Tel Aviv University) developed a method to measure photocurrents of a single functionalized photosynthetic protein system. The scientists could demonstrate that such a system can be integrated and selectively addressed in artificial photovoltaic device architectures while retaining their biomolecular functional properties. The proteins represent light-driven, highly efficient single-molecule electron pumps that can act as current generators in nanoscale electric circuits. The interdisciplinary team publishes the results in ´Nature Nanotechnology´ this week.

The scientist investigated the photosystem-I reaction center which is a chlorophyll protein complex located in membranes of chloroplasts from cyanobacteria. Plants, algae and bacteria use photosynthesis to convert solar energy into chemical energy. The initial stages of this process – where light is absorbed and energy and electrons are transferred – are mediated by photosynthetic proteins composed of chlorophyll and carotenoid complexes. Until now, none of the available methods were sensitive enough to measure photocurrents generated by a single protein. Photosystem-I exhibits outstanding optoelectronic properties found only in photosynthetic systems. The nanoscale dimension further makes the photosystem-I a promising unit for applications in molecular optoelectronics.

The first challenge the physicists had to master was the development of a method to electrically contact single molecules in strong optical fields. The central element of the realized nanodevice are photosynthetic proteins self-assembled and covalently bound to a gold electrode via cysteine mutation groups. The photocurrent was measured by means of a gold-covered glass tip employed in a scanning near-field optical microscopy set-up. The photosynthetic proteins are optically excited by a photon flux guided through the tetrahedral tip that at the same time provides the electrical contact. With this technique, the physicists were able to monitor the photocurrent generated in single protein units.