You`ve probably heard about some of the benefits that come with green roofs. Green roofs have the ability to mitigate the heat island effect, absorb rainwater and improve overall insulation. Numerous studies have shown that green roofs can significantly reduce a building`s energy consumption:

One Canadian study found that a simple 6-inch extensive green roof reduced summer energy use by as much as 75 percent. A more recent study from 2012 revealed that green roofs are capable of cooling indoor air by 3.6° F in the summer, which reduces annual energy demand by 6 percent. 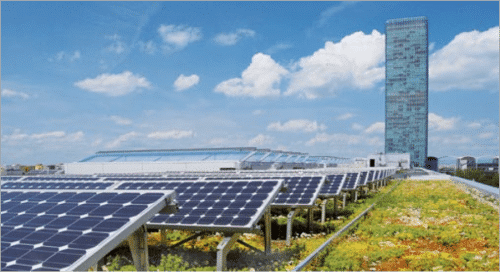 It also turns out that solar panels can benefit from green roofs. Solar cells tend to perform better and convert more sunlight into electricity under cool conditions. Heat is also generated as a result of solar radiation, which is why high-performing solar panels often have the need for extra cooling. If solar panels are positioned on top of a conventional roof that consists of gravel or bare waterproofing membrane, even more heat is generated.

However, if solar panels are combined with green roofs, evaporative cooling induced by plants can lead to lower ambient air temperatures, which increases the output of solar cells:

Research carried out in Berlin has indicated that the cells over a green roof were found to have a 6% higher output compared to cells on a bitumen roof. A study by Bronx Design and Construction Academy in New York City indicates that the green roofs can boost the output of solar panels with 3%.

These findings are not only valid for green roofs – solar panels might perform even better if placed over vegetation in the garden.

The combination of green roofs and solar panels does seem to yield significant benefits.  A green roof does not only conserve energy and reduce the workload for the solar system, but also increases energy output. The extra performance boost will help offset the cost of the green roof and the solar panels on top of it, which in the long run will lower solar panels cost.

Mathias Aarre Mæhlum is a freelance blogger and in his spare time works for Energy Informative. This is a site where people can learn more about solar panels and other green technologies including wind turbines and geothermal heating/cooling systems. Homeowners will find a lot of tips on how to improve energy efficiency in their home.