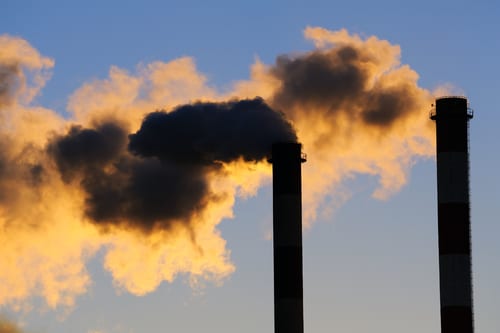 One of the biggest threats to the environment in the United States unfortunately stems from one of the most integral parts of its economy: coal. Used to power businesses and homes alike, coal has been a major force behind America’s rise to superpower status. But the byproduct of coal is pollution that could be contributing to a dangerous shift in the climate.

The good news is that scientists are hard at work finding solutions to today’s big environmental quandaries. A recent study conducted by the University of Oregon suggests that cooling coal emissions could have a positive impact on both air quality and emission levels. Published in the American Physical Society’s journal Physical Review E the study’s results show that cooled coal emissions would reduce carbon dioxide emissions by as much as 90 percent.

The greatest benefit of cooling coal emissions would be a reduction in the carbon dioxide released into the atmosphere. Excessive carbon dioxide emissions play a significant role in the climate change problem we are currently facing. Much of the carbon dioxide reductions would result from the more efficient production of coal. Currently, older coal plants are only converting 35 percent energy input to electricity. With the addition of new cooling technology, this figure could jump to 60 percent.

Perhaps the largest concern on the part of the public is the potential cost of cooling coal emissions. But proponents of this technology say costs would be offset by a decline in health problems associated with coal production. Scientists estimate that poor air quality derived from burning coal costs the health care system somewhere between $330 billion and $500 billion every year. And that’s only taking the financial cost into account. The human cost includes about 24,000 deaths caused by pollution from coal-fired plants.

The University of Oregon conducted a separate economic analysis aimed at determining the potential savings to society that could result from cooled coal emissions. The official estimate is that this system would reduce societal costs by at least 38 percent. This is a significant figure that should not be ignored as politicians debate the financial viability of such a program.

Cooling coal emissions would do the public a great service on a wide scale level, but on a smaller scale, you can take steps to ensure the air inside your home isn’t causing health problems. A home air-cleaner – equipped with the right filter – can remove mold spores, smoke, bacteria, auto emissions and other irritants from the air. These filters help reduce allergy and asthma symptoms, making the air more breathable for society’s most susceptible people. But cleaning the air outdoors should be a priority for everyone.

Ideally, the scientific community would like to transfer as much energy from coal to renewable resources as possible. However, this is a difficult task given the current state of the economy. Cooling coal emissions would be an excellent first step in the battle against climate change and air pollution.