Five of The World’s Most Sustainable Sports Stadiums

Thanks to writer Jay-Jay Stephens, who provides us  with a glimpse of what he states are some of the most sustainable sports stadiums in the world. In addition to everything else, they are phenomenal to behold!

Sustainability is one of the most important aspects of any new architectural design and in recent years we’ve seen this spread into the world of sports stadiums. Traditionally, the concept behind sports stadiums has been to create a colosseum-like structure which adds theatre and creates an incredible atmosphere with little prior thought ever given to sustainability. Recently, things have begun to change and we’re now seeing more and more architects giving sustainability the attention it deserves when designing new sports stadiums. 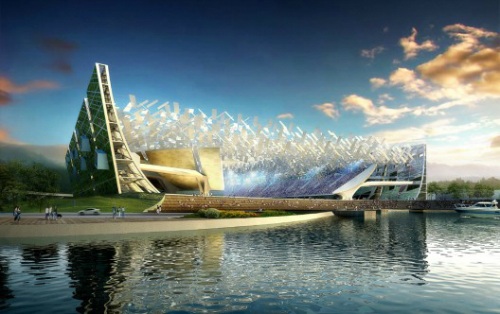 This proposed design by Los Angeles based architects NBBJ gives the impression that the stadium is literally growing out of the ground. Two of the exterior walls are completely covered in grass and plants while the other two open up to allow those on the outside to glimpse what’s happening on the inside. NBBJ are known for their sustainable approach to design, especially when it comes to utilising the concept of green roofs and put sustainability at the forefront of this highly innovative design by using renewable energy, day lighting, and water recycling together with the natural green exterior, clad in living plants which change with the seasons.

The concept of creating a sporting legacy was of paramount importance to the London 2012 Olympic bid team as was the need to design sustainable stadium. Central to the design was the desire to use as many different forms of low impact materials as possible. HOK stated that “The emphasis in the design has been and will continue to be on minimising the quantity of material, whilst still producing the required performance”.  Here, the key was to design a lightweight, compact stadium and to significantly reduce the amount of material and energy used in creating the build.

This bubble like stadium was designed by Cox Architects and completed in 2010. The design uses state-of-the-art engineering and combines this with sustainability. It features a unique cantilever design together with a triangular panelised façade which reduced the amount of steel used by a typical cantilevered roof by 50%. The geodesic roof uses some of the most advanced cladding used anyway where in the world which helps to regulate the temperature of the building. As much as 500,000 gallons of water can be saved each and every year thanks to a rainwater collection system and the system can also provide four other venues in the precinct with water.

Known for its snake like appearance, the World Games Stadium is not only aesthetically pleasing but has true green credentials as the 8,844 solar panels which cover the roof power the entire stadium as well as helping to create additional money through selling the surplus energy back to Kaohsiung. The stadium cost $150 million to build, hold 55,000 spectators and could potentially generate enough electricity every year to power up to 80% of the surrounding neighbourhood.

The New York Giants, New York Jets and the United States Environmental Protection Agency came together to turn the stadium into one of the greenest venues in sport. The pledge vowed to reduce air pollution, conserve energy and water, improve waste management and reduce the environmenta